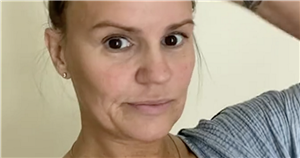 Kerry Katona has revealed she’s now in talks with a surrogacy company after previously opening up about her plans for baby number six.

Writing in her weekly new! magazine column, the former Atomic Kitten star reveals she’s speaking to Tony and Barrie Drewitt-Barlow – who were the first gay men in the UK to father children through surrogacy – to discuss the next steps in a bid to expand her brood with fiancé Ryan Mahoney. Kerry also talks about her plans to have a non-surgical face lift. Sign up – for free! – to see what she has to say.

Are you an OK! VIP? If not, why not? It’s free and gives you backstage access to stories like this, exclusive home tours, special discounts and so much more! All you need to do is pop your email address below! P.s. if you’re already seeing this article in full, congrats – you’re already on our guest list!

I’m having a call with a surrogacy company because I want to find out what the next steps are. I have a few questions, like whether I need to extract my eggs and how old I can be. It’s Tony and Barrie Drewitt-Barlow’s company, who were the first gay men in the UK to father children through surrogacy.

I’m not getting any younger and I don’t want to be a mum in my sixties taking her kid to school. So once I know all the steps I have to take, it will give me a good 20 years to be with my child. It’s exciting. I’ll know a bit more next week!

I’ve had a lovely jam-packed week with the kids for half term. We went to an escape room – and we failed miserably! I realised we don’t work well together as a family.

I can understand why people would get divorced after coming out of an escape room. Ha! We also went bowling and did some horse riding, which was good fun. And then on Bank Holiday we went to Brighton Pier. It was lovely weather and the kids had such a great time.

It was Ryan’s birthday, so we went to London for the weekend and stayed in a hotel. It was really nice to spend some quality time together. I treated him to a lovely Louis Vuitton coat. We also went to watch my pal Duncan James in his cabaret show.

There was a story last week about him making a joke and comparing his drag alter ego to me – I can’t believe that even made the news, to be honest! Me and Duncan have known each other for years and we recently rekindled our friendship after we did Celebs On The Farm together.

I’ve got an appointment with a doctor about getting a non-surgical face lift. I feel like I’m getting jowls so I just want a little one. I’m also going under the knife in July for my boob reduction, so I’m going to tell him to tuck and suck everything in while I’m there. If I’m already under, then why not?

It’s like going in for an MOT! Don’t get me wrong, I embrace my body and I love my stretch marks. But I look at a picture of myself and I think, “God, I look a mess!” I was 17 when I started in this industry. You get told to look a certain way and if you put weight on, you’re expected to lose it. It has definitely affected me.

June is pride month – and I think it’s such an important month for everybody to express who they truly are. A lot of my family members are gay. My mum was in an 11-year relationship with a woman and I was bullied at school because of it.

I remember it was my ninth birthday and my mum threw me a little party. I was waiting for people to turn up and no one did. And it was because my mum was with a woman. I was playing pass the parcel on my own. I swore I’d never have another party after that and I never did until I was 30. Even though I’m not gay myself, I understand how it feels to be bullied and judged because of someone’s sexuality.