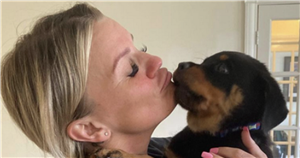 Kerry Katona has splashed out £20,000 on protection dog for her family after her friend Katie Price was targeted by thieves.

The former Atomic Kitten singer shared a series of videos of her new dog being trained by specialists, telling fans she should be able to take him home in August.

In one of the videos, a petrified Kerry could be seen wearing an arm protector as she put her arm out for one of the more trained dogs to latch onto. She told fans the dog was "so scary."

Captioning the post filmed at at Ambassador Protection Dogs in Devon, she wrote: "Only go to the best if you want the best.

"@ambassadorprotectiondogs my dogs make me feel so safe so having that but more protection goes a long way!" alongside a series of heart emojis.

In another post, the 40 year old shares an adorable video of Thor who is just a puppy now and will be undergoing training. In the video, the playful Rottweiler pup runs up and down as she gushes about his new collar.

In a caption shared with the video, she wrote: "Omg he’s just the cutest @ambassadorprotectiondogs can’t wait to see him again “Thor”."

The reality star and her family are already owners of a Rottweiler called Princess who she claims went into a "strop" after meeting Thor.

News of Kerry's new protection dog comes just weeks after she announced that she bought a new family home.

The £2million mansion features six bedrooms, a cinema room and her very own walk-in closet.

In the encouraging post announcing her new home, the TV personality reflected on her difficult past and admitted that her and her family had been renting since 2008 after she was forced to file for bankruptcy.

Penning the moving caption, she wrote: "After losing EVERYTHING 13 years ago and having to rent I’ve finally bought me a house!!

"I want to share this news because many times over the years I literally felt suicidal! BUT I never gave up!"

Although many people were happy for Kerry, she revealed that some critics trolled her about her finances, questioning where she was able to get the money to buy a house from.

In her new! column, she addressed a couple that she saw on Facebook that made a video questioning how she could afford a house.

She wrote: "They were talking about me as if they bloody knew me! It was shocking! I was blown away.

"They were asking where I've got my money from after I was made bankrupt. I felt like I had to respond so I put a video up on my Instagram.

"People need to mind their own business."