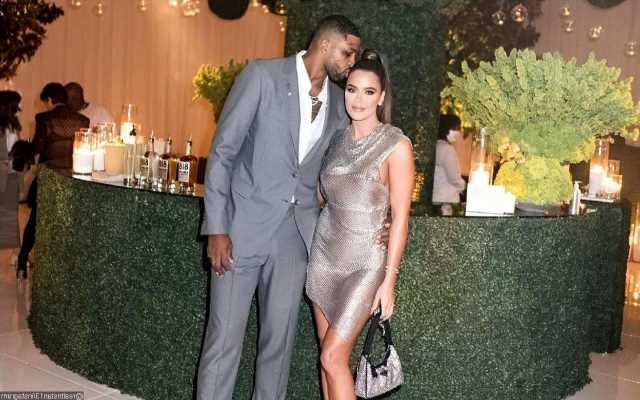 The ‘Kardashians’ star’s surrogate conceived her baby No. 2 in November last year, but by December words got out that the NBA star had secretly fathered a child with Maralee Nichols.

AceShowbiz –Khloe Kardashian does not appear to be willing to give Tristan Thompson another shot. If a new report is to be believed, “The Kardashians” star, who is currently expecting baby No. 2 with him via surrogate, “doesn’t care” whether the NBA star is present for the baby’s birth.

On Thursday, August 4, HollywoodLife reported that the Good American founder “does not care if Tristan is there or not.” As for the 38-year-old reality star, she reportedly “wants to be there for the birth.”

“Everyone in the family is so proud of the way that she handled the entire Tristan situation,” the so-called insider said, adding that Khloe has taken her mind off of the whole debacle by getting prepared for the arrival of her 4-year-old daughter True Thompson’s new sibling. “Khloe’s been frantic getting everything perfect for the baby and she’s gone way overboard. Not only has she had the nursery done for months, but she has stocked her place with everything that any baby could ever possibly need and more,” the informant revealed.

Although Tristan has not been by her side during the past few weeks, Khloe has been getting the help of her family members, particularly her sister Kim Kardashian. “She has been getting so much help from her sisters, and especially Kim,” the source told the outlet.

“Kim has really helped to prepare Khloe for what to expect when her surrogate gives birth and the time after being she used a surrogate for the last several births of her own children,” the insider shared, “Khloe is going to love this child just like she does True, and the family knows that she will be the best ‘Mom [of] 2’ ever.”

Despite being reported that Khloe doesn’t care about Tristan’s presence on the special day, it’s alleged that she “still loves Tristan.” Late last month, a source told Page Six that “[Khloe] is fixed on redeeming him, and nothing would shock me if they got back together again.”

The insider further spilled that Khloe’s family is supporting her whatever her decision is. “This is really why the family is not shunning Tristan. They’re standing by Khloe, of course. The Kardashians always stick together,” claimed the anonymous source.

As to Khloe’s decision to have another child with Tristan, the informant explained, “Khloe always wanted True to have a little brother, that was her dream. When she and Tristan created the embryos together, they were very much in love, and Khloe was excited for the future.”

The embryo was implanted into a surrogate in November 2021, but by December words got out that Tristan had secretly fathered a child, a son named Theo, with another woman, Maralee Nichols. “Her friends were so upset about the Tristan drama, and then those who were really in the loop knew that it was even more complicated because they had a baby on the way,” the source shared.