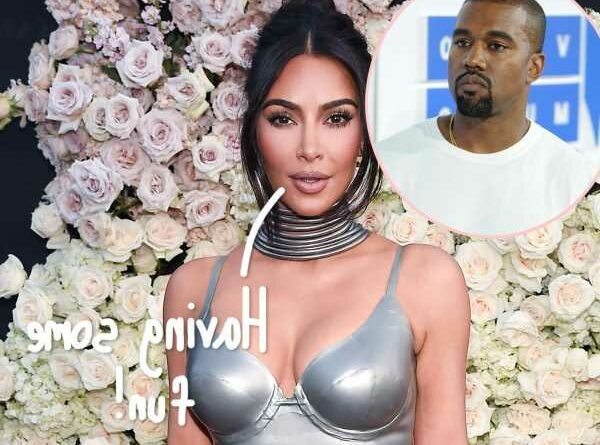 Kim Kardashian is in a celebratory mood after finalizing her divorce from Kanye West this week!

The 42-year-old television personality joined a bunch of celebrities — like Karlie Kloss, Jared Leto, and Lori Harvey — in heading to Miami on Thursday for an event put together by W Magazine and Burberry at Art Basel. And boy, did she make a statement, especially when it came to her sexy outfit! Kim showed off her abs when she stepped out in a custom Vex Latex bandeau top, pairing it with some blue and white pattern pants, black thigh-high boots, and sunglasses.

Wonder what Ye would have to say about this look. It’s not like he’s held back his opinions on her ensembles in the past, especially after their split!

Khloé Kardashian joined the SKIMS creator for the night, wearing an all-black, form fitting jumpsuit. That night, the pair also went out to eat at Gekko restaurant with Serena Williams and Jonathan Cheban. You can ch-ch-check out paparazzi pics HERE!

Kimmy Kakes’ partying in Miami comes after she and Kanye finally completed their divorce. The settlement — which saw the pair agreeing to joint legal and physical custody of their four kids — undoubtedly comes as a relief to the reality star, as she’s been battling this for nearly two years. A source told ET:

“Kim is relieved that her divorce from Kanye was finalized and that the details of their agreement have been sorted out. This is what she has wanted for quite some time. She is looking forward to moving forward and continuing to focus on her kids and their happiness.”

We cannot blame her for taking a moment for herself, especially after Ye’s latest antics! Reactions? Let us know!