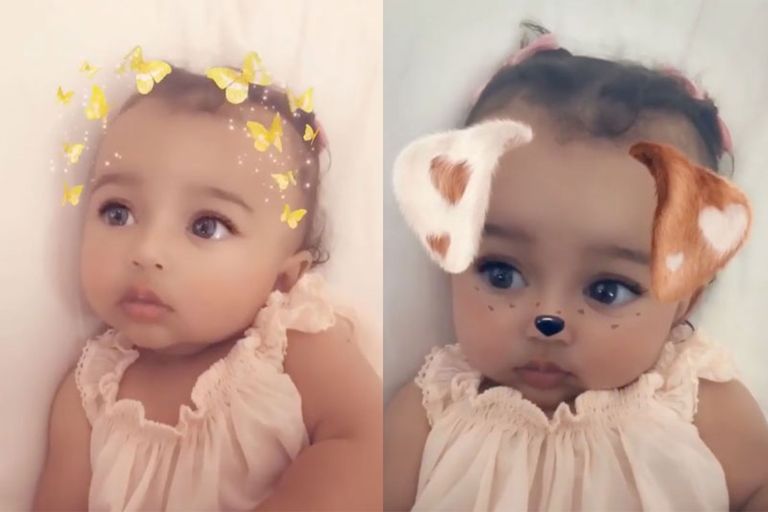 Since Kylie Jenner decided to stop posting pics of baby Stormi on Instagram, it feels like there’s been a drought of Kardashian bb pictures. Have no fear! Kim is here to save the day. She posted three adorable videos of Chicago this weekend to fill the void.

In the first video, Chicago sported the lipstick and sticker filter. “Hey Chi, look at me! Hi cutie!” Kim said in the video.

And finally, the last video, in which a young Chicago wore the butterfly crown filter.

Kim posted these three videos of the 5-month-old over the weekend. There’s a filter on every one, and a source recently told People that this is intentional. Kim and Khloé in particular hardly ever share pictures or videos of their babies without a filter, and it’s because they feel like it’s safer to protect the kid’s faces with a lens than to have them exposed. That said, the two recently shared a picture of Chicago and True together without a filter.

Happy Birthday to one of my favorite souls on this planet! @khloekardashian This year you have shown strength like none other. I admire you for always following your heart. I love seeing you as a mom and can’t wait for the years ahead. Let’s celebrate you today! I love you to infinity!

And Kim has posted pictures of her three children together sans puppy ears in the past.

Welcome to the good life…

Kylie stopped sharing pictures of Stormi’s face last month. An insider told People at the time it was because she didn’t want her daughter’s face to be part of something negative.