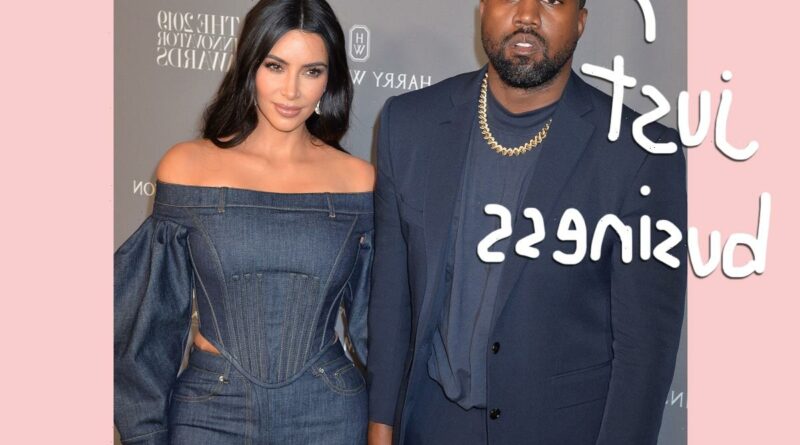 Kim Kardashian and Kanye West gave fans a LOT to talk about this week!

In case you missed it, the former (??) couple went through a whole faux wedding as part of the listening party for Ye’s long-awaited Donda album on Thursday night. Kim stood there in a full wedding dress, veil and all, as part of her ex-husband’s live show.

Naturally, fans were convinced the exes were getting back together, and this was their big coming out party. Considering how lovingly Kimmy continues to speak about the Jesus Walks rapper, many thought this was an elaborate reconciliation!

In addition to the whole wedding role play, the former couple were even seen holding hands as they left!

But as we discussed earlier, per TMZ’s sources, they’re not back together. And now a Page Six insider is backing that up, assuring fans the couple not only didn’t get married again, they weren’t even trying to “recreate” their famous nuptials. No, the entire thing was just an example of Kanye’s “performance art” that he wanted Kim to participate in. And the KUWTK star, still in admiration of Ye’s artistry, agreed.

Wow. They really aren’t involved romantically, he’s out there with models, and she still is willing to come to town and be a featured extra in his one-man show? We’re not sure if that’s breakup goals or more evidence she isn’t really ready to move on yet. (Some fans even wonder if the whole divorce was a publicity hoax!)

As you may have heard, earlier this week an insider revealed Kim has no plans to remove Kanye’s last name from hers and will continue to be Kim Kardashian West. Why? Easy — “because West is the kids’ last name.” The source said:

“It makes it easier and not confusing for them. They are always going to be a family and family unit. She feels like it’s in the kids’ best interest to all have the same last name.”

All that and the fact that while Kanye has already moved on with Irina Shayk and subsequently moved on from that relationship — and Kimmy has yet to dip her toe into the dating pool, is it any wonder fans could believe she was willing to say “I do” all over again??

What do YOU think of Kimye’s latest non-romantic collaboration??