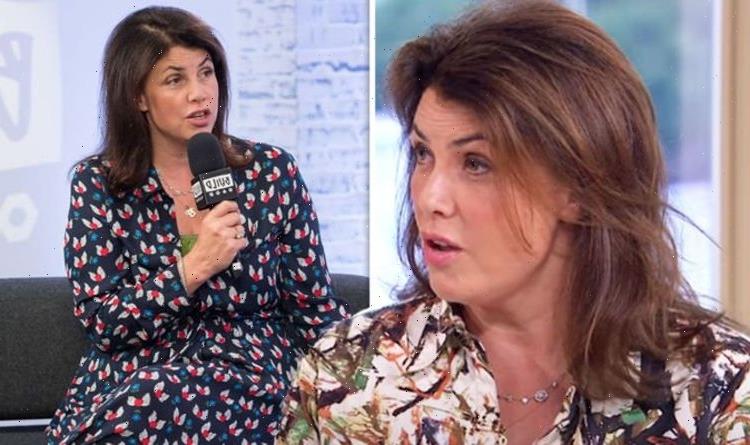 Kirstie Allsopp tweeted about exam results yesterday, as children across England and Wales received their final grades for their A-levels and GCSEs this week. The Location, Location, Location presenter said she has witnessed the “inequality” firsthand within her own household.

Kirstie is mother to two sons, Bay, 15, and Oscar, 13, who she shares with her husband Ben Andersen.

The 49-year-old vented her frustrations over the education system as she alluded to the virtual learning provision provided by her sons’ schools during lockdown.

The Channel 4 broadcaster claimed the inequality of results would be “exacerbated by Covid”.

In view of her 424,000 Twitter followers, Kirstie fumed: “In the last 48 hours I have seen, within own my family, the inequalities with education that have been so exacerbated by Covid.

“Two kids, two schools, two very different sets of results. I saw what one school did in lockdown and what one did not.”

Kirstie did not say which of her children she was referring to, while she is also step-mother to her husband’s two children from a previous relationship.

Her comments sparked division, as one social media disagreed, saying: “Don’t blame the schools… Don’t blame anyone, kids learn differently and perhaps they aren’t both academically minded, so test results don’t prove anything… “Maybe try to understand your kids and how their results reflect their personalities before blaming the schools and covid.”

Another agreed: “I really don’t think it’s fair to blame the schools. We did everything we could in my school but unfortunately, the gaps are huge within the children in the same class. I am sure some schools didn’t do enough but there are many that did and are being tarnished with the same brush.”

Others appeared to agree with Kirstie’s stance: “Just shouldn’t be happening. Utterly unfair on young people.”

A fourth added: “I completely agree – how could any of this be fair when some children have had fantastic lessons by Teams (from both state and private schools) while for others it has been woefully inadequate for many reasons. These results have not been run on a level playing field.”

Kirstie, who was privately-educated, recently addressed her decision to send her own children to private school, as their father was not a fan of “London comprehensives” otherwise known as state schools.

“My children are in the independent school sector,” she told the Guardian, in a candid interview last year.

Independent schools are all overseen by a board of governors or trustees, whilst other private schools may be run by their owner with no governing body.

Kirstie suggested that the impact of Covid would create a greater divide within the British education system.

She continued: “The problem is, it is a divide. It isn’t a good thing, but it is so low on the list [of priorities] and after this it’s going to be even lower.”

The Channel 4 star added that she believes “we should try to find a way” to solve the issue.

Kirstie later took to the micro-blogging site and fired back at a social media user, who took a swipe at her earlier tweet.

The person in question wrote: “The British education system produced you – nuff said!”(sic)

The property expert took the opportunity to respond as she retweeted the post.

Kirstie wrote: “Classic Twitter, is this a compliment or is it not?”