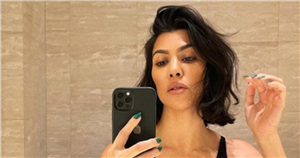 Kourtney Kardashian has hit back at one of her followers after they accused her of getting "plenty of surgery" in a trolling comment.

The fan insisted the only way the 42 year old mum-of-three, who recently hit back at more trolling over her figure and pregnancy claims, could have such flawless and incredible skin and a svelte figure was because she'd undergone surgery after surgery over the years.

It came after Kourtney, who is engaged to Blink-182 drummer Travis Barker, shared a series of before and after snaps of the whole clan.

But the reality star's appearance came under scrutiny after one fan commented that she "really didn't change" over the decades – whereas they claimed her sisters had.

In response, another follower insisted: "Kourtney got plenty of surgery.

"She just did it in an extremely natural way that still complimented her features instead of changed them."

The POOSH lifestyle brand founder was then accused of having a whole range of cosmetic procedures, as the troll went on: "She's had botox, nose job, some sort of butt shot or [Brazilian butt lift] just to start."

Hours later, Kourtney spotted the comment and hit back at the claims.

"No better compliment than a too good to be real kind of compliment," she teased.

"Butt shot and brazilian butt lift, um thanks, and you were just getting started."

Fans were quick to like Kourtney's quip as they praised the star for standing up for herself.

It comes as a recent Thanksgiving trip with fiancé Travis prompted speculation she was pregnant.

The star shared a series of bikini photos on her Instagram page as she enjoyed time in the hot tub.

One social media user then wrote: "Not to be that girl but… is that a preg belly."

Determined to shut down the constant speculation over her body shape, Kourtney fired back: "Are we really gonna do this every time I post a photo?'

For all your latest updates on the Kardashian family, sign up to OK!'s daily newsletter.