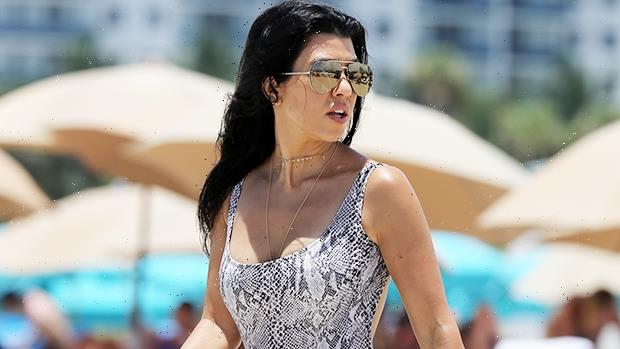 Kourtney Kardashian and Travis Barker had the ‘best weekend’ together in Montecito, enjoying the beach with loved ones and more! See photos and video from their getaway!

Kourtney Kardashian and Travis Barker had an absolute blast during their weekend trip with family to Montecito! The Keeping Up With The Kardashians star, 41, took to Instagram on Monday, June 21, to commemorate the couple’s getaway with a carousel post, which included a fun video of Kourt rocking a leopard print two-piece. In the clip, Kourt, Travis, his son Landon Asher Barker, 17, daughter Alabama Luella Barker, 15, and their half-sister Atiana De La Hoya, 22, were captured running into the ocean.

Some members of the group carried white and aquamarine striped beach towels, to keep themselves warm in the chilling ocean water. As the waves came crashing in, Kourt and Travis led the way back to the beach! Upon running up toward the camera, fans got a glimpse of Kourtney’s two-piece and saw Travis guide her back into shore. Just take a look at the clip above!

Of course, that wasn’t the only part of the weekend getaway that Kourt’s Instagram followers had the chance to see. The second image in the carousel post featured a look at the sprawling beach and all of the lounge chairs and umbrellas on the sand. A third image captured two such beach chairs from the back — maybe it was Travis and Kourtney’s spot!

Also included in the carousel post was a snapshot of some food that Kourtney enjoyed at Tre Lune, a restaurant in Montecito. Among the final images was a photo of a beautiful garden, and a snap of bungalow 2B, likely where Kourt and Travis may have stayed. “Weekend,” Kourtney captioned the post with a white heart emoji. Naturally, Travis commented on the post, too, writing, “best weekend,” along with a few emojis.

The entire weekend looked like so much fun, and was definitely full of a lot of romance for the celebrity couple. Ever since going public in February 2021, Kourtney and Travis have proven that they are simply smitten with each other. The two go way back and have been friends for years, providing a strong foundation for this next level of their relationship. Fans cannot wait to see what this couple shares next!