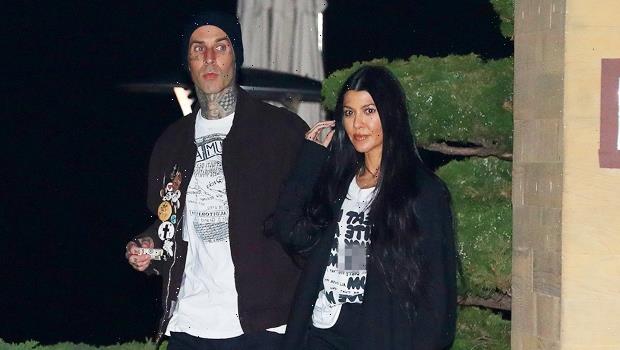 Kourtney Kardashian and Travis Barker took their love to Las Vegas on May 21. The drummer, 46, was playing a show and his lady love, 41, was by his side to offer her support. Kourt took to her Instagram Story while Travis was playing a set, and shared footage of the drummer going all out! Travis could be seen bobbing his head along to the music that was playing, as he kept time and hit every beat perfectly. Just check out the clip below!

Travis and Kourt have been going strong and maintaining their support for one anther since taking their romance public in February 2021. The couple, however, has been met with new claims from Travis’ ex Shanna Moakler. While chatting with TMZ, Shanna alleged that Kourtney and Travis’ romance played a role in her ‘alienated’ relationship with her teens — son Landon Asher Barker, 17, and daughter Alabama Luella Barker, 15 — whom she shares with Travis.

“My family is broken because of this family and now my kids and I are alienated from each other because of another sister in the family, so yay for me,” Shanna told the outlet. When the model and actress, 46, was asked if she had a message for Kourtney, she offered some harsh words. “Thanks for destroying my family.”

Although Shanna has doled out some shade when it comes to Travis and Kourtney’s romance, the couple has seemingly ignored it. Kourt and Travis have been living on Cloud Nine since taking their romance public. They’ve even shown their fans intimate moments from their time together by posting PDA pics on social media.

While Kourt was with Travis out in the desert, her sisters — Kim and Khloe Kardashian, and Kylie Jenner — were celebrating sister Kendall‘s new 818 Tequila brand at her launch party the same night as Travis’ show. Kourtney did, however, post about the new Tequila label on her Instagram Story, showing her little sister some love while she was away. Fans surely cannot wait to see what the future holds as Kourtney and Travis continue their romance.