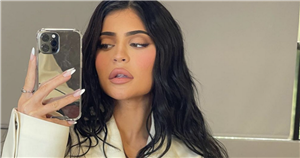 Kylie Jenner fans are convinced her second child will be a baby boy after spotting a cryptic clue on social media.

The 24 year old announced she was pregnant with her and 30 year old boyfriend Travis Scott's second child together on Tuesday night after weeks of speculation.

But the former Keeping Up With The Kardashians star didn't reveal too many details about her pregnancy, leading fans to speculate about the gender of the impending arrival themselves.

The make-up mogul's admirers have flocked to Twitter since her emotional announcement, with many guessing she will be welcoming a boy.

One wrote: "Congrats @KylieJenner on baby #2 I feel like it's gonna be a Travis jr as in a boy."

A second penned: "idk why but i feel like kylie jenner is gonna have a baby boy."

Others commented: "kylie jenner is having a boy. i’m calling it," and: "I’m so happy for you!!! Hoping for a boy."

Some fans also attempted to guess the baby's name, with one saying: "i have a feeling kylie jenners having a boy and she's gonna name it Bolt."

With another guessing: "@KylieJenner name your baby boy “cloudy” it will be perfect stormi and cloudy!"

A final fan wrote: "Kylie Jenner definitely having a boy me thinks."

Kylie announced the news in an emotional Instagram video, beginning with the star holding a positive pregnancy test as she walks to break the news to her rapper beau Travis, who is later seen sweetly hugging Kylie's stomach as she giggles while filming him in the mirror.

The family then travel to the doctor, where Kylie is seen having an ultrasound. Kylie's doctor can be heard telling the star: "Honestly, you're days away, couple of days away, from a heartbeat."

The next part of the clip sees Stormi giving Kylie's mum, Kris Jenner, a white envelope as the momager asks: "Oh what is this?"

Kris then opens the envelope to reveal several ultrasound scan images. As the news sinks in Kris asks: "What is it?," before looking shocked and asking Kylie: "Are you pregnant?"

As Kylie confirms the happy news, Kris then sheds tears of joy and says to her granddaughter: "Stormi, we're gonna have a baby! This is one of the happiest days of my life," and gets up to hug her pregnant daughter.

For the latest updates on Kylie and her pregnancy journey, sign up to OK!'s daily newsletter.