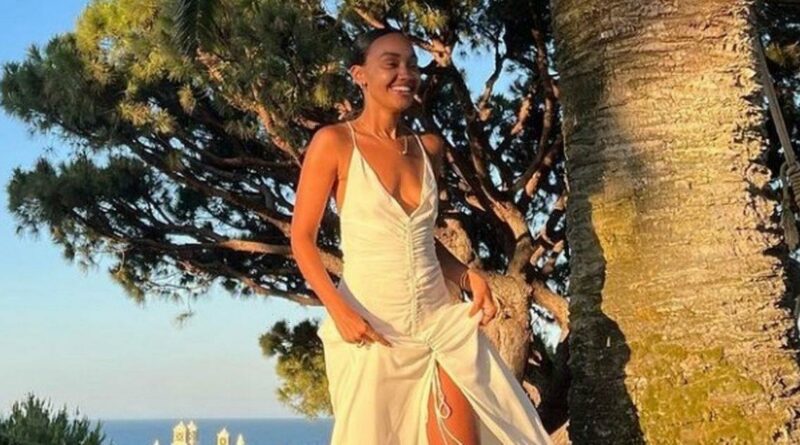 Leigh-Anne Pinnock sent fans into a frenzy after she posted photos of herself wearing what appeared to be a wedding dress recently.

The 30 year old shared snaps of herself sporting a flowing white dress as she soaked up the sun in Jamaica, where she is currently holidaying with her fiancé Andre Gray, 31, and their twin babies.

Leigh-Anne looked stunning as she was seen in the photos stood by palm trees on a grassy lawn wearing a white billowing dress with a plunging neckline and a gathered detail at the centre.

The Little Mix star showed some leg in the design as it had a long slit along the front of the skirt and she wore her dark brown slicked back in a low ponytail.

It would be easy to assume Leigh-Anne was modelling a wedding gown considering the design, and the star teased fans who may have thought it was, as she wrote in the caption: “Just marri…kidding” followed by a laughing emoji.

Followers went wild in the comment section in reaction to the post, as one person said: “You had us!”, while another warned jokily: “Don’t do that Leigh!”

Leigh-Anne and Andre were rumoured to be planning a wedding in Jamaica in May as they ventured to the Caribbean Island to celebrate their sixth anniversary with friends and family.

It is thought that the couple chose Jamaica as their wedding spot as they both share British and Jamaican heritage.

"Leigh-Anne and Andre have been planning their special day for months,” a source told The Sun.

"They chose to marry in Jamaica because of their family ties to the island, which they think of as their second home.”

Leigh-Anne and Andre have been engaged for two years and, while reports of their wedding have been made, no wedding rings have been seen on their fingers just yet.

Leigh-Anne’s ‘wedding dress’ post comes after she recently shared a sweet photo of herself and Andre holding their twins, whom they welcomed last August, while on holiday.

Leigh-Anne has yet to reveal her babies’ names and spoke about her decision to keep them private in May, as she told The Sun: "I'm just trying to keep it as private as possible for as long as possible.

“It was a decision we made at the time because [the attention] was freaking me out a little bit.”