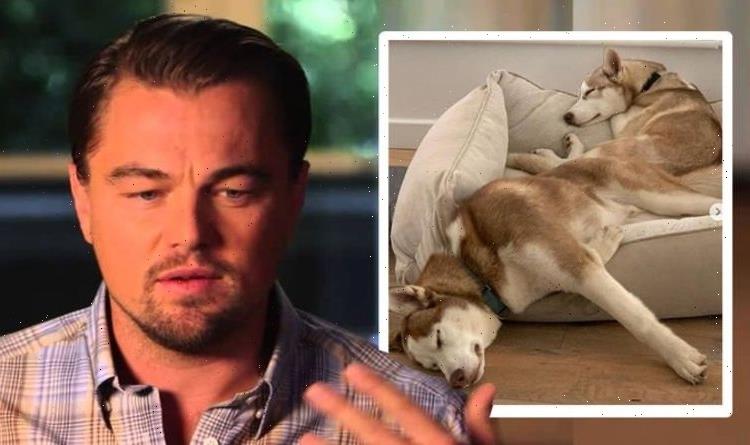 Leonardo DiCaprio, 47, revealed he was forced to jump into icy waters to save his two pups, who had unexpectedly fallen in. The horror accident happened on the set of his new film, Don’t Look Up. The Hollywood legend was shooting the disaster comedy when disaster quite literally struck, leaving the Oscar winner to rescue the huskies after one nearly drowned.

I didn’t understand what you do in a frozen lake!

The revelation comes after the cast spoke to Entertainment Weekly’s Around the Table, where he explained what happened and confirmed both dogs, Jack and Jill, are now safe and well.

Discussing “ridiculous tales” from the set, the story was prompted by director Adam McKay.

“You gotta tell the frozen lake story,” he urged Leo.

“The funniest thing was, Leo has these two rescue huskies that are just absolute tornadoes!”

Jonah Hill cheekily added: “Full like the joker, they thrive in absolute chaos.”

With pressure from his colleagues, Leo began to recount those heart-stopping moments.

“Basically, they both fell on a frozen lake,” he said.

“I didn’t understand what you do in a frozen lake!”

Unable to finish the story himself, Jennifer did it for him.

“One of the dogs fell in, and he jumped into the frozen lake to save the dog,” she summarised.

“And then as soon as he pushed the one dog out of the pond, the other one jumped in.”

Leo chuckled as he interjected: “Well, the other one started licking the one that was drowning, and then we all were in the frozen lake together.”

He continued to explain that due to living in California, his Los Angeles based huskies didn’t really understand the concept of a frozen lake.

Leo adopted the two snow dogs with his girlfriend of nearly five years Camila Morrone, in 2020, and they also have an additional huskie named Sally.

The chat comes after Jennifer spoke out about being “driven crazy” by Leo and Timothée Chamalet, while filming a scene for the film.

While promoting the movie, Jennifer appeared on The Late Show With Stephen Colbert, where she had the audience in fits of giggles with her stories from the set.

“They drove me crazy that day!” she exclaimed.

Explaining that the scene they were shooting was in a car, she revealed she had no idea what had gotten into the pair.

“Timothée was just excited to be out of the house.”

The 31-year-old star, who is expecting her first child with husband Cooke Maroney, admitted bluntly: “It was the most annoying day in my life!

“I think it was his first scene.

“And Leo had picked the song that was playing in the car.