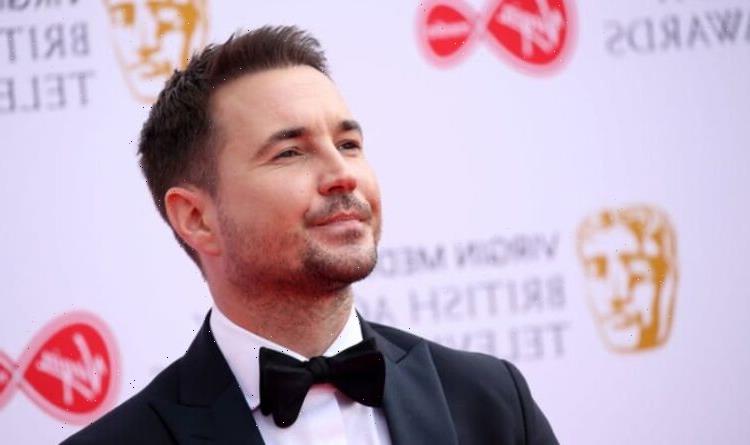 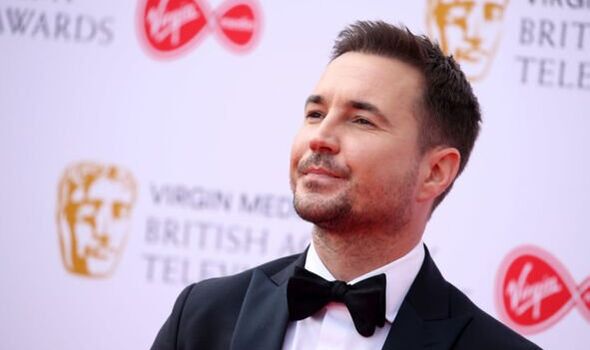 The smash hit BBC1 police drama turned the 37-year-old actor into a hot ticket and he is now so much in demand he’s racing from one juicy acting role to another with barely time to draw breath. Currently starring in the cop drama Traces, on the Alibi channel, he has also filmed an Amazon Prime sci-fi drama, The Rig, and is about to show off his leading man skills on a new ITV drama, Our House, alongside Tuppence Middleton, 34.

Asked how he managed to fit all that work in, Compston acknowledged his diary was overloaded. “That’s probably a better question for my wife,” he smiles. “I’m very lucky to have an incredibly understanding wife.

“I had promised the family I’d take the summer off once I finished The Rig, but the scripts for Our House were too good to turn down.” Compston has been married since 2016 to American actress Tianna Chanel Flynn. The couple, who live in Las Vegas, became parents to son Brodie in 2020.

“I’m not just jumping to the next [role] for the sake of it,” he continues. “But the stuff coming in, I really want to do. I don’t want to get negative, but there will come a time when the phone isn’t ringing, [so if] people are looking to you as the go-to guy, you’ve got to make the most of it.”

Family life aside, it’s easy to see why he leapt at the chance to play Bram Lawson in Our House, an adaptation of Northumberland-born Louise Candlish’s best-selling 2018 thriller.

Author Louise says: “It’s a mind-blowing experience seeing characters you created on the page spring to life. Well, they really do. Bram is a man who makes a lot of mistakes, but Martin has that warm, everyman quality, that X-factor, that makes you root for him no matter what. “Tuppence is perfect as Fi, the woman faced with the loss of everything she’s built, piece by piece, over years. The heartbreak of the original story is right there, front and centre.”

The role of Bram, a departure from troubled anti-corruption officer Arnott, sees Compston returning as a charming but flawed character whose poor decisions drag him into a nightmare of his own making.

“I just came off The Rig, and then read this. It’s a classic ITV thriller that was a real page-turner, it was really exciting to be a part of that,” he says. “It’s the sort of genre of suburbia and everything going wrong.”

The story follows two trajectories, starting with a bombshell moment. Bram’s wife, Fi Lawson (The Imitation Game’s Tuppence Middleton), arrives home one evening after work to find somebody else moving into their London house. All of their possessions are gone, as is her (estranged) husband. Shocked and confused, she rages at the unwelcome guests as she tries to track down Bram for an explanation – but he’s disappeared.

A flashback to several months ago reveals how Bram and Fi’s relationship fell apart when she came home one day to find him having sex with her best friend Merle (Weruche Opia). The couple split but decide to share custody of their young sons – they each take turns to live at the family home while the other stays in a jointly rented flat, an arrangement known as “bird-nesting”.

“Our House is about a couple going through divorce, something that 50 per cent of the population will experience, so it’s something that people will really relate to,” explains co-star Middleton.

“Fi is confronted with the idea that she might lose her house and everything that’s important to her. She has this seemingly perfect relationship and family and then it all kind of goes horribly wrong when we watch her sort of spiral.

“It’s so rooted in recognisable everyday life that it gives us the opportunity to ask ourselves, ‘What would I do? What if that happened to me?’ That’s a real thrill.” Whitechapel star Rupert Penry- Jones also co-stars as Toby, amysterious character with designs on Fi.

“Toby is a very successful guy, a breath of fresh air for Fi, who’s going through a break-up,” he explains. “She sees him as an escape and he’s there for her. He’s very understanding about her situation. But there may be more to him than meets the eye.”

In the meantime, Bram looks very much like the bad guy in this marital and financial catastrophe. Martin hopes that viewers will warm to the charismatic Bram despite his mistakes.

“The script is full of bad sliding doors moments as in ‘What if somebody hadn’t done that? Then things would have been fine,” says Compston. “And that’s all a great part of the drama. But it just never seems to go quite well for certain characters.

“There is a sense that things spiralled out of control for Bram and we feel some sympathy for him along the way. He’s definitely a reckless guy but at times I hope the audience are rooting for him as well.”

Line Of Duty fans might be surprised to learn that Compston found this new role tougher than playing Arnott. “It’s probably the most emotionally draining part I’ve played ina long time,” he says. “The scripts are relentless. I think it’s maybe because I was a couple of weeks late to filming.”

That was due to an overlap of schedules with The Rig. “A lot of my scenes are compacted together, so it just felt like it was non-stop, with a lot of high drama and emotionally challenging scenes. They’re a gift for an actor but they can go very dark at times. “That can take a lot out of you. So I’m just trying to give it everything I’ve got at the moment.”

Compston jokes that he locked himself away during filming so that he wouldn’t be tempted to go out. “I got myself in a hotel in the middle of nowhere, not anywhere near my friends, because that’s the one thing about London, there’s far too much mischief [there],” he quips.

There is still no news yet about whether there might be a seventh series of Line Of Duty but it surely must have been difficult to deal with the howls of protest that accompanied the finale of the sixth season last year? Fans were incredulous when the identity of ‘H,’ a powerful crime lord, was revealed to be the dull, oafish cop Ian Buckells, played by Nigel Boyle.

Today Compston seems sanguine. “People invested so much time in it and so everybody is entitled to their opinion and you’ve got to respect that,” he says. “It’s just one of those things. “It got a bit out of hand how big it got but it’s really exciting. “The support we’ve had from people over the years has been outstanding. “It’s taken us from a wee show on BBC Two to become the biggest drama of the century. That’s a blessing.”