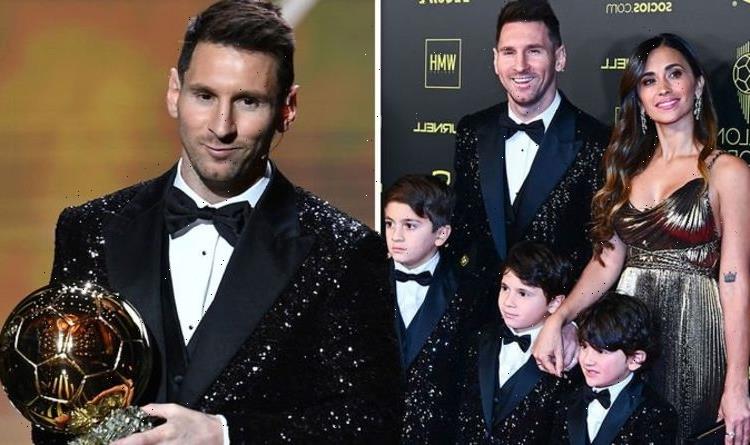 Lionel Messi, 34, celebrated his success at the Ballon d’Or ceremony this evening alongside his stunning other half Antonela Roccuzzo, 33, and their three sons, Thiago, nine, Mateo, six and three-year-old Ciro. The Paris St-Germain and Argentina forward was joined by his family on the red carpet before winning the Ballon d’Or, which is awarded to the best footballer of the year, for a record seventh time.

Messi was honoured with the gong in a ceremony at the Theatre du Chatelet in Paris.

Antonela stole the show at the glamorous event in a shimmering metallic gown, aptly coordinating with her husband’s trophy, which is designed to resemble a golden ball.

The dress featured a low-cut neckline and nipped the brunette beauty in at the waist to show off her slender figure.

The skirt of Antonela’s dress flowed down the red carpet due to its intricately pleated design.

The gown was complete with gold chain-inspired detailing across the spaghetti straps and at the waist.

Antonela completed her look with smokey eye make-up and opulent gold jewellery as she beamed with pride alongside her family.

Messi opted for a suave look with a twist for the event, as he smiled next to his family in a bejewelled black suit.

The couple’s sons looked just like their father, as they adorably wore matching sparkling suits for the ceremony.

Messi has known Antonela since he was five.

The childhood sweethearts got married in what had been branded the “wedding of the century” in the city of Rosario, Argentina in 2017.

When he took to the stage to accept his award this evening, Messi credited Robert Lewandowski, who finished as runner-up.

He said in his speech: “Today I’m here in Paris.

“I am very happy, really very happy, I really want to continue to fight and reach new objectives.

“I don’t know how many more years but I am really enjoying myself. I thank my team-mates at Barca, Paris & Argentina.”

Messi went on to insist that his fellow sportsman Lewandowski deserved to win last year’s award, after the event was cancelled amid the Covid pandemic.

He said: “Robert, you deserve your Ballon d’Or.

“Last year, everyone was in agreement to say that you were the big winner of this award.”

He has also scored 40 goals in 2021 – 28 for Barcelona, four for Paris St-Germain and eight for Argentina.

The Ballon d’Or is voted for by 180 journalists from around the world.