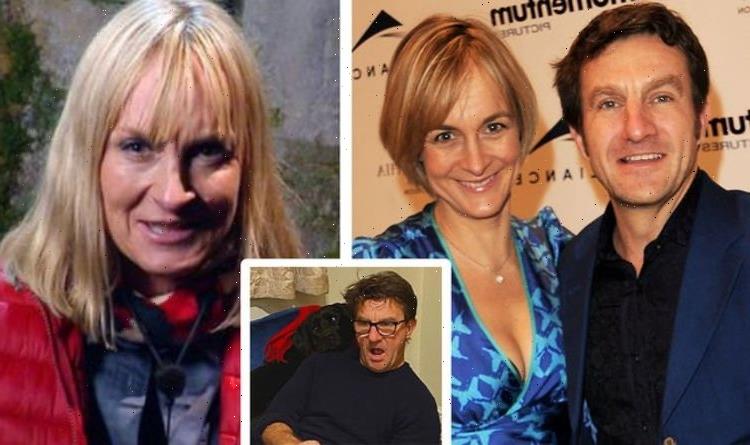 Louise Minchin, 53, stunned fans as she headed off into the Welsh wilderness for this year’s I’m A Celebrity series, and her husband Dave couldn’t hold back his horror at Tuesday evening’s trial. The latest challenge saw Snoochie Shy and Naughty Boy go head to head as they took on Treacherous Traps and it was one that left viewers squirming.

Taking to Instagram during the show Louise’s family, who are running her social media accounts while she’s in the castle, shared a snap of what was going on back in the comfort of her own home.

Sharing a horrified looking Dave sat on the sofa with their labrador Ruby, who looked equally as terrified, they posted the caption: “Husband Dave and Ruby watching last nights trial.

“You can vote for Louise now on the @imacelebrity app.”

Taking to the comments section, fans were beyond surprised at the restauranteur and investor’s rare appearance.

Another agreed: “Nice to see you Dave!”

Others were focused on Ruby’s reaction, with one commenting: “Ruby looks terrified, and rightly so.”

“Poor Ruby looks like she’s trying to hide away. She does look adorable,” a second added.

A third joked: “Not sure which of them looks more scared!”

While a fourth cringed: “OMG it was toe curling.”

Dave and Louise married in 1998, in a tiny Hampshire church.

“Other guests sat outside with a picnic during the service and cheered when we came out.”

While the former BBC Breakfast star rarely speaks about her husband, earlier this year she opened up about a “turning point” in their relationship.

They make an active couple, with Louise competing as a professional triathlete, and Dave being a keen skiier.

Louise said: “Swimming was my thing. And I also love skiing and my husband is a really good skier.

“And I always go skiing with him and it was just like, my gosh, trying to keep up with him, you know, was really hard because he’s very good, very fast, very safe.

“And then there was one point in our relationship when things changed and I’d been doing a lot of spinning. I used to do spin classes and I came down a glacier and I said: ‘Oh, my gosh, where is he?’

“I was literally standing there for ages going: ‘Oh, this is so bad. I’ve left him on the mountain.'”

She remembered his response: “He goes: ‘No, you’re just really fast.’ And that was a day that our relationship on the mountain changed.”