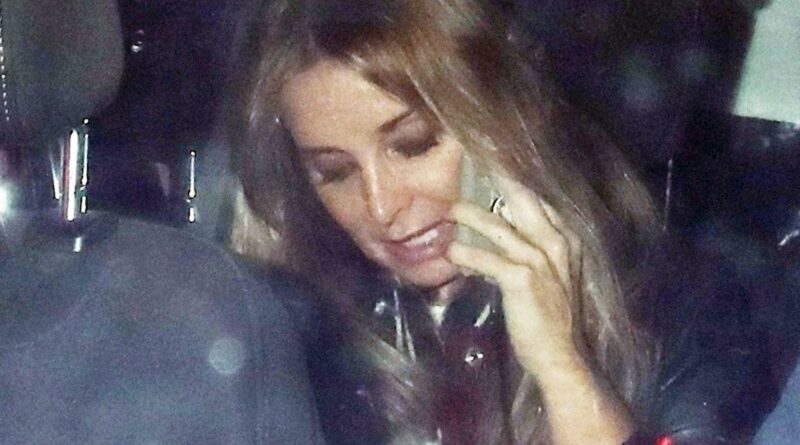 Louise Redknapp was seen for the first time since news of her ex-husband Jamie Redknapp's marriage to Frida Andersson-Lourie emerged.

Jamie, 48, married 37 year old Frida in an intimate ceremony on Monday afternoon, leaving Louise reportedly "shocked" at his decision to re-marry as she "didn't have a lot of time to prepare".

But Louise put on a brave face as she embarked on a phone call while leaving The 9 To Five music press night at the New Wimbledon Theatre on Monday evening.

The 46 year old cut a lone figure as she hopped into the back of a car to be chauffeured to her next venue for the evening. Former Eternal singer Louise looked casually cool for her outing in a baseball-inspired black jacket which she teamed with a white top and black jeans.

Sporting a sleek blowdry and a glamorous coat of make-up, Louise failed to raise a smile as she chatted away on the phone.

Her sighting comes after her "shock" at ex Jamie's wedding was revealed.

A source told OK!: "Louise was quite shocked, she only found out very recently. They kept it very under wraps, nobody even knew they were engaged.

"It's very mixed emotions for her, it's difficult because she's spoken quite openly about her regret. She's blamed Strictly quite a lot but, unfortunately, you can't turn the clock back. The source added that Louise was only informed of the nuptials because Jamie wanted their sons – Charley, 17, and Beau, 12 – to enter Kensington and Chelsea Register Office with him.

"He wanted his sons to walk in with him, but it was a very small affair," they continued. "She only knew because the boys were there.

"She didn't have a lot of time to prepare because Jamie just wanted to be married before the baby was born. He was desperate for them to be man and wife before."

During the nuptials on Monday, pregnant Frida looked elegant in a white off-the-shoulder dress.

The fitted dress hugged her bump and moved in the breeze as she left the registry office hand-in-hand with her new husband.

The groom looked dapper in a dark blue suit, which he paired with a white shirt, black tie and black shoes.

Jamie and Frida's happy day is steeped with even more excitement as the pair are also expecting their first child together.

Frida is understood to be due to give birth in November, but have kept the details of Frida's pregnancy private.