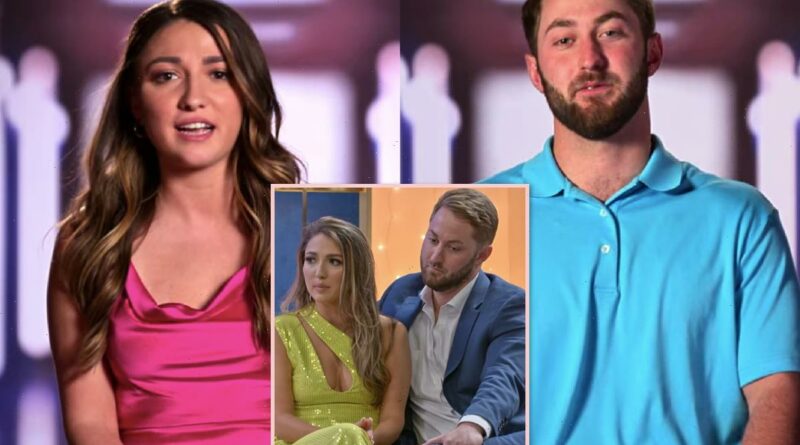 Love Is Blind stars Colleen Reed and Matt Bolton are finally speaking out about those abuse allegations.

As fans know, Matt and Colleen fell in love and got engaged after meeting in the pods during season three of the Netflix dating series. But once they stepped out into the real world for a group trip to Malibu, they started to experience problems…

They got into a massive fight over Colleen’s conversation with co-star Cole Barnett at the pool about how the two would normally go for each other outside of the show. Matt’s explosive reaction caused many viewers to point out some red flags in their relationship. Despite their problems, the pair ended up going through with it and saying “I do” — much to the disappointment of many viewers.

Fans continued to raise concerns that Colleen was in an abusive relationship when the reunion episode dropped earlier this month, with many pointing out how she appeared uncomfortable while sitting next to Matt — her typical bubbly personality nowhere to be seen. While Colleen and Matt stressed they were fine, many fans still have stormed Twitter and even her Instagram comments section over the past couple of weeks to express their worries for her safety. See some of the comments (below):

“Is Colleen ok?? I’m genuinely concerned. Her shifty eyes and fake smiles were so scary this entire reunion episode. Someone please check on her.. Matt is terrifying.”

“Colleen looked genuinely scared and uneasy during the love is blind reunion, and after seeing the way Matt would take their arguments from 0-100 within seconds and get unreasonably angry… I’m concerned for her. I really hope she’s okay.”

“No one’s gonna talk about how Matt is a COMPLETE red flag?! The way he talks to her, the way he reacts when he gets upset, and even their BODY LANGUAGE together, all of those are Look at Colleen during the entire reunion. She is not comfortable with him”

“colleen looks so terrified when they showed the clip of her and cole at the pool party, i cant even imagine the fight that went down after matt saw her at the strip club for her bachelorette party…”

Now, the couple are finally addressing the allegations of abuse. In an interview with Us Weekly published on Wednesday, Colleen made it crystal clear the “harsh assumptions” about their relationship are “absolutely not true,” saying:

“Some of the comments are just laughable at how wrong it is or way off the mark they are. been hard is the criticism for each of us personally, because we know each other, we know the person. And I can see the things that they’re saying about him, and he can see the things that people are saying about me. And it’s like, ‘No, that’s not true. Don’t let that get to your head let that affect you. Don’t let that change you.’ We know us. But when it comes to the personal stuff, that’s what stings.”

“What’s frustrating with what people do say about our relationship is that these really harsh assumptions, that’s really tricky to talk about. And it’s just completely wrong. It’s completely not true. And it’s really sad what people are saying.”

And apparently, none of Matt and Colleen’s loved ones have witnessed anything to cause concern about their marriage. Colleen said:

“We’re just surrounding ourselves around our family and our friends who have been nothing but supportive. Not once has someone said in our lives, in our everyday lives like, ‘Oh, should we be worried or listening to these comments?’ They’ve actually just told us the same thing — be true to ourselves. They know us, we know us, we’re fine. So I would say that’s the biggest thing that we would wanna clear up is that these things that people are saying are just absolutely not true.”

As for why she appeared uncomfortable on the reunion special? That wasn’t Matt — it was the fans! Colleen said she wasn’t feeling “okay” after receiving a bunch of negative comments from viewers on social media, explaining on Instagram Wednesday that her husband is the one who was making her feel better:

“Thank you to this man for holding me up when I was not my best. Thank you for being my boulder as you promised to me in our vows. During the reunion, I was not okay given the negative commentary I had experienced. I’ll be honest in saying I let the internet tear me down and take the light away from me. Matt did not let this happen. He has done everything possible to put a smile back on my face and bring me back. I held onto him for support. He reassured me that I was going to be okay. Watching it all back and filming the reunion only brought us closer than we ever thought we could get. I can’t thank him enough for being there for me.“

Meanwhile, Matt shared with Us that it’s “been tough” to see the abuse allegations on social media:

“The first day that it really started getting nasty online with some of these accusations and stuff, like, that was tough to see. And to Colleen’s point, we know who we are. It’s unfortunate that the world doesn’t see it as that, but to some point, it is what it is. If that’s how they’re gonna feel, then that’s on them. We know how we are. We know who we are and we love each other to death and we’re just continuing to do our thing. That’s a tricky topic to discuss, but yeah, it hurt being accused of some of the things that people are saying.”

The twosome both wished they were able to speak out about their issues at the reunion – especially their intense fight about Cole. Colleen told the outlet:

For Matt, he went on to explain their fight in Malibu, saying his trust issues from a previous relationship and the pressure of the reality show played a part in his outburst:

“I think that first fight in Malibu — there’s a lot of factors that go into it. First of all, my past with the trust issues was a big deal. We didn’t really sleep a lot. We’re in the sun all day. Cameras are in your face 24/7. You’re expected to get married — not expected, but you have an opportunity to get married — within five weeks. So you really want everything to go perfectly. And when something little happens, and it’s not necessarily going perfect, for me, at that time, it was like, ‘OK, well if this isn’t perfect, then I’m gonna run away and I’m not gonna do it.’ And that was kind of my mindset.”

Looking back on the situation, the sales executive said the way he handled the situation was “dead wrong.” He also insisted he “never” called Colleen names, “really screamed,” or become “aggressive” with her, as fans of the show have accused him. But he did try to end the relationship — something he really regrets:

“Seeing myself wanna leave so quickly and just want to run away instead of just sitting there being calm and talking about it, I wish I could do it a little bit differently. But once again, we learned from it and we grew from it.”

We truly hope everything is okay with Colleen as they move forward with their relationship. Reactions, Perezcious readers? What did you think of the situation between Matt and Colleen on the show? Let us know in the comments below.

If you or someone you know is experiencing domestic violence, help is available. Consider calling the National Domestic Violence Hotline at 800-799-7233, or text START to 88788, or go to https://www.thehotline.org/.