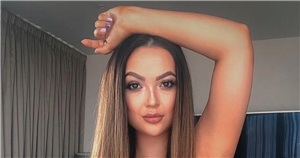 The 25 year old, who was the first person to be announced to be going into the villa this year, has an incredible background as both a civil servant and a beauty pageant queen.

Before working in government departments, including the Department of Transportation and the Department of Health, the star was deep into the world of pageantry. Sharon even bagged the coveted award of becoming Miss International UK in 2018.

Now, during her introductory Q&A session ahead of the return of the programme next Monday 28 June, the stunning star has revealed she shared the same pageant director as 22 year old Molly-Mae.

When asked if she knew any of the former Love Islanders, Sharon explained: "I used to do pageants. Molly-Mae and I had the same pageant director."

She added: "I was Miss International UK."

Putting those days behind her now, Sharon is on the look out for love and maybe even bag the £50,000 prize that comes with winning the ITV show.

When asked what she's looking for in a partner, she said: "I have this thing where if something doesn’t work out with one person, I’ll try and go for the other extreme to see if that works out.

"I tend to date someone who is taller than me, even though my last long-term partner, he was actually someone who was shorter than me."

She continued: "I’m quite an intellectual person so I want someone who can kind of match that."

Sharon went on to insist she won't be having sex on TV in the new series, explaining that she won't follow in the footsteps of former Love Island star Zara Holland.

Zara Holland appeared in the 2016 episode of the show and was stripped of her Miss Great Britain title after having sex with Alex Bowen in the villa.

Speaking to The Sun, one of Sharon's friends described the personality of the new recruit as they said: "Sharon is intensely political and a big campaigner around equality and women’s rights.

“She’s always talked of wanting to work in politics so is likely to use her platform on the show to talk about issues which she feels passionately about.

“She is going to take everyone by surprise.

"She’s a real crusader and has a lot in life she wants to achieve.”