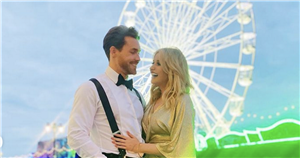 The Love Island star took to social media to share a picture with her new beau, with the caption: "Good things come to those who wait," with a heart eye emoji and a Champagne emoji.

Amy stunned in the photo in a gold dress and heels, while her boyfriend wore a white shirt, black trousers and a bow tie.

Amy's friends were quick to congratulate the star on her new romance, with Anna Vakili writing: "Yayyy, so happy for you."

And Yewande Biala wrote: "Been waiting for this announcement! So happy for you both."

In a second snap, Amy and her boyfriend can be seen posing for a selfie while enjoying drinks.

Amy teased her new romance by sharing a message from a fan which read: "Amy! You seem to have really come out of your shell and have a new found confidence and fabulous-ness recently!! Whatever has changed, keep it up because you just seem so happy!"

Amy then answered the fan by writing: "This is why…" before sharing the photo of herself and her new man.

Amy hit headline while in Love Island after her romance with Curtis Pritchard came to an end.

Despite the heartbreak in the villa, the star admitted she doesn't regret going on the show, as it "saved her life".

Speaking to the Sunday Mirror, Amy explained: "Everyone says, 'Is Love Island the worst thing you’ve ever done for your mental health?'

"And I say, no, it’s actually the best thing I’ve ever done for my mental health because I would never, ever have had those tools. I would never have known anything was wrong.

"I suffer with anxiety but I didn’t know until Love Island.

Amy previously explained to OK! that while she and Curtis don't speak every day, they do get along and enjoy each other's company now.

"I mean, we don't speak often. We message occasionally, just to check in," she said.

The stunning star added: "But I think, you know, I enjoy working with him because he's like me.