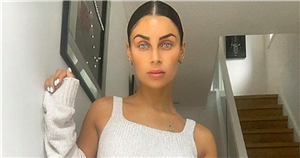 Former Love Island star Cally Jane Beech has split from her boyfriend Nathan Malcolm, according to an insider.

Cally, 30, and the Fresh Couture founder, 25, started dating around three years ago, following Cally's split from Love Island partner Luis Morrison back in 2018.

But a source has claim Cally has now parted ways with Nathan after the mum of one, who wants to settle down, realised they are not "on the same page" in their relationship.

An insider told The Sun said: “Cally and Nathan had a really strong relationship and he was really close to her daughter Vienna.

“At the end of the day though, things just didn’t work out – Cally was keen to settle down and Nathan wasn’t quite on the same page."

It comes after Cally shared a post about "red flags" on social media.

She shared a video with her 291,900 followers on TikTok of herself dancing into a bathroom, with the words: "Me ignoring all the red flags with the hopes he possesses a green one."

The post was captioned: "Libras be lovers you see" with shrugging and crying laughing emojis.

After finishing finished fourth in the first series of Love Island back in 2015, Cally and Luis continued their relationship and welcomed daughter Vienna together two years later.

It made them the first couple from the show to have a baby together.

But they called it quits on their romance for good in September 2018 after being on-off for over a year.

The pair had a public spat on social media a few weeks later after Cally posted scathing tweets about Luis, claiming she had "been taken for a complete mug!"

The brunette beauty now lives with Vienna in a stunning renovated home in Hull, where she is from, which boasts a lavish interior.

Since their break up, Luis has welcomed son Romeo with model Chloe Elizabeth, who he has since split from.

Romeo was in hospital for nine weeks after being born prematurely in October last year. Having arrived 11 weeks early, his parents were finally able to take him home shortly before Christmas.

Chloe shared a snap of her leaving the hospital with Romeo to Instagram, writing: “There is no words to explain how much of a rollercoaster the NICU has been but if do it all again if it meant I got you as the end result.

"Romeo you truly are my little superman, I am the luckiest girl alive to be ur mammy."