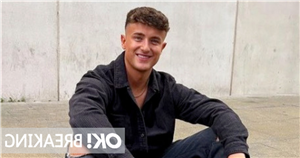 Love Island star Liam Llewellyn has revealed he was rushed to hospital on Thursday 1 September and forced to cancel his work appointments as a result.

The 22 year old, who left the villa early after realising her "wasn't even 10 per cent of his normal self", took to her Instagram stories to inform his 348,000 followers of the news as he wrote: "Hey guys, just jumping on to let you know that I was hospitalised last night so I will not be fit to fly.

“Because of this I will not be in Bandon or Riverstick Cork, Ireland this weekend. I’ll be in Cork on the 23rd and 24th, apologies for the inconvenience but will catch you soon.”

Liam has offered no explanation for his hospital visit and OK! has approached his representatives for further comment.

The reality star, who is the son of for Welsh Rugby Union player David Llewelyn, found fame on the hit ITV dating programme this year, where he was originally paired with footballer Michael Owen's daughter Gemma, 19.

Gemma then coupled up with Davide Sanclimenti, 27, before going on to find love with now-boyfriend Luca Bish, 23 – after Liam's exit from the show just four days in.

While on the programme Luca received heavy criticism for his actions, including being branded a "bully" by viewers over his treatment of Tasha Ghouri.

But Liam has since come to his defence as he told MailOnline: "I know Luca and what he's really like and it's nothing like as he's coming across.

"All of a sudden, the edit he's getting isn't quite justified. It is hard for me to sit here and watch that while the viewers are forming opinions whereas if you spent 10 minutes with him that would change."

He added: "Any opinion people have about the show I'm thinking you have no idea, I think if only you knew.

"You're seeing such a small segment they really don't know what's going on. It's a TV show, they have to make drama and turn something that's small into something big and the viewers get lost in all of that."

Since leaving the villa, Luca has finally made his romance with Gemma official.

Luca posted a stunning video of the romantic moment with Gemma looking both shocked and thrilled at the gesture, as he captioned the Instagram post: "Finally," with a red love heart.

She also took to Instagram to share pictures, writing: "Finally official. Thank you @lucabish for such a special night!"