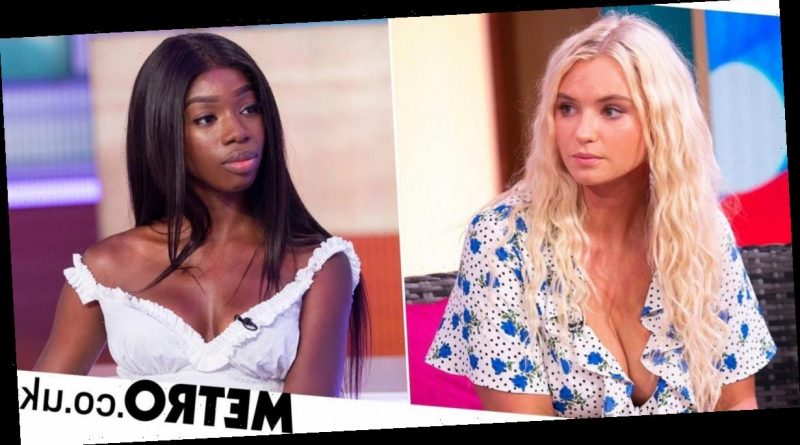 Love Island’s Yewande Biala has said ‘racialized re-naming’ stripped her of her identity, amid her row with Lucie Donlan.

The two islanders have clashed after old comments made by Lucie in a Reddit Q&A in 2019 resurfaced, in which she claimed Yewande ‘bullied’ her.

Yewande, who appeared on the fifth series of the show in 2019 with Lucie, later tweeted: ‘’You refused to call me by my name because it was too ‘hard to pronounce’ now you wanna say I bullied you !! Bullied.’

The Irish star has now explained why Lucie allegedly refusing to pronounce her name properly was so hurtful.

The 23-year-old shared a statement on Twitter, writing: ‘This is the last thing I’m going to say about this situation…..’

Yewande, who moved to Ireland at a young age from Nigeria, wrote: ‘I think one of my earliest memories of racialized re-naming was when I was exploring different secondary schools. One of the schools I was interested in, btw I didn’t end up going, asked me for my full name. Which is, Yewande Elizabeth Biala.

‘After having difficulties pronouncing my name, she went forward and asked if we could just put it down as Elizabeth Biala, as it would be easier for everyone. In that moment, all I heard was that I didn’t matter, and I was an inconvenience. From that day I made it my mission to make sure people knew my name was important, after all that is my identity.

She wrote: ‘I corrected her multiple times, I didn’t mind, because you are going to get it right. There was a moment just before a challenge. This was after 3 weeks in. She mispronounced my name, I correct her again and her reply was “yeah whatever you know what I mean” I remember one of the producers put her arms around me.

‘Being black on TV means not rising your voice, not being too defensive, because you don’t want to creative [sic] the narrative of being an angry black woman or being a bully. I am not a bully, it’s such a huge accusation and one that should be handled very seriously.

‘And lastly, I encourage everyone to be aware of racialized re-naming and name-based teasing. I think we should all be working towards being better advocates and creating a different dynamic around these narratives.’

Friends and fans applauded Yewande’s statement, with Chanté Joseph replying: ‘Sending so much love and solidarity. So many people are identifying with this right now!’

Lucie claimed she was receiving death threats over her row with Yewande, and said that the comments had been dug up ‘purely to incite a row between two females’.

The surfer told the MailOnline: ‘I said on the show I had trouble pronouncing Yewande’s name, it’s just what I’m like.

‘And I asked if I could use a shortened abbreviated version of her name instead as a term of endearment – there’s nothing sinister to it.

‘I regret how just a few old comments sent 18 months ago has snowballed like this and got out of hand, and drummed up some needless negativity.’

Love Island stars Amber Gill and Amy Hart have sided with Yewande in the argument, with Amy tweeting: ‘This beautiful, respectful QUEEN has sat on this for almost two years. We haven’t spoken about it publicly because it was Yewande’s story to tell. I remember dates, times, locations of every conversation in that villa. There’s so much you don’t see.’

Amber added: ‘Btw asking someone you don’t know (well) who has an ethnic name if you can call them a “nickname” is not a term of endearment it’s a micro aggression & you don’t have the right to say there is no malicious/sinister intent you just don’t do it. I thought that was just common sense.’

Meanwhile, Maura Higgins appeared to side with Lucie, by sending the reality star a bouquet of flowers.