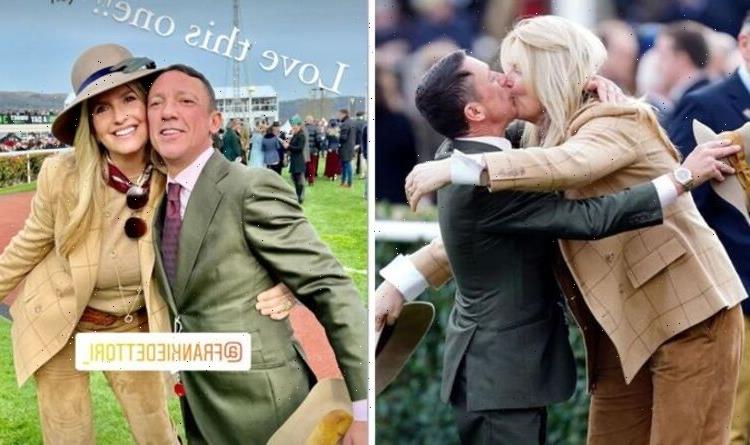 Penny Lancaster, 51, turned heads as she shared a kiss on the lips with Italian jockey Frankie Dettori at The Cheltenham festival with husband Rod Stewart. The two attended the races alongside many other famous faces, among whom included the veteran jockey.

Penny took to her Instagram after her day out to gush over her time with Frankie, in view of her 154,000 followers.

The former model posted a snap of her and Frankie sharing a hug alongside the caption: “Love this one!!”

Snaps from the event showed the Loose Women panellist sharing a friendly kiss on the lips with Frankie.

Penny was then pictured lifting Frankie into the air.

The pair laughed with each other as the TV star and host appeared to carry the jockey without much effort.

Further photos showed Penny and Sir Rod having fun together at the races.

The couple were dressed to impress, with Penny in brown cords, tan leather boots, and a tweed jacket.

She also wore a silk scarf and dark shades on top of her head.

The pair were also celebrating Penny’s 51st birthday on the day.

Shortly prior to this, Penny came out with some good news last Thursday in regards to her career.

The star explained that she made her first ever arrest as a special constable with the City of London Police.

She revealed that she had pulled over a drug suspect.

The TV star started working as an officer following the completion of her training last year.

She explained to BBC’s CrimeWatch live programme that she was on patrol with two other officers when they pulled over a suspect.

After completing a roadside breath test, the driver tested positive for cannabis use, following which Penny made the arrest.

The star admitted that she had some anxiety, which led to her nearly forgetting to read the man his rights.

She explained that it didn’t take long for her training to kick in, however.

Having taken the suspect into custody, the panellist said she was proud of her achievement.

She said: “My first arrest was a drug drive.

“There were a couple of suspects whose vehicle was pulled over and a test was taken on the side of the road.

“They came back positive for cannabis so driving under the influence.

“I was given the wink and the nod by the officers that were with me.”