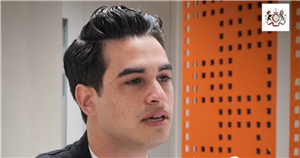 Made in Chelsea favourite Robbie Mullet has recalled the sad death of a close family member as he teams up with the Department of Health and Social Care to investigate the progress to reduce HIV transmissions in the UK.

Teaming up with the government department – as well as the Terrance Higgins Sexual Health Trust – for World Aids Day, the 23-year-old reality star revealed he lost a family member during the global epidemic to HIV.

Though he doesn't go into specifics, clearly becoming emotional, Robbie explains: "The fact that I had someone in my family that I never got to meet because of this, which is something that I can avoid so easily now."

The star also revealed he currently takes PrEP (pre-exposure prophylaxis), a prescribed medication that can significantly reduce your chances of contracting HIV from sex or injection drug use.

"There's no shame in me saying I'm on PrEP," he tells viewers, pausing frequently as he tears up. "There's no shame for some people that have HIV, that they have HIV. And it's now undetectable in the system that we're not going to pass it on."

"If I'd been born 20 years earlier, my life would have been completely different. And that's such a terrifying prospect but also it fills me with such a privilege.

Last year, after first joining the show, UCL law student Robbie sat down with on-screen pals Olivia Bentley and Inga Valentiner to teach them about the HIV medication.

"I’m going to be starting the New Year with safety in mind," he told them over drinks. "Have you heard of PrEP?

"It’s this drug that we take and if you take it daily, it will stop the transmission of HIV by 99 per cent."

Inga – seemingly unaware of the drug's beneficial uses – dubbed it "insane", was then asked by Robbie if she'd watched the hit Channel 4 series It's A Sin, which explored the impact of the AIDS epidemic on the LGBTQ+ community.

Robbie replied at the time: "I think it was the best depiction of that era and how awful it was with the AIDS epidemic. My dad had a family member that died of AIDS, and so this, I think, means so much more on top of that, do you know what I mean?".

Tearing up again, he added: "And that’s obviously a family member that I never got to meet. It’s obviously such a privilege for me to be able to take this, you know?"

Robbie is currently dating his fellow Made in Chelsea co-star Joel Mignott, a Leeds-born model who joined the cast this year, the pair having met at a nightclub in London and recently making the decision to move in together.