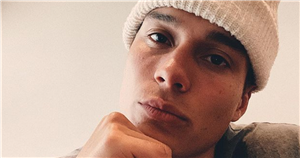 Made in Chelsea's Miles Nazaire has opened up on living in the same house as his ex-girlfriend Maeva D’Ascanio and her current boyfriend James Taylor, who used to be his best friend.

While the Chelsea fave, 25, exclusively told OK! it is a "pity" his friendship with James, 25, broke down, he revealed he wanted to get on with his life and “it has moved on now”.

“I think in terms of James and my friendship with him, it's one of those things I look at in the past and think, 'Yeah, we had a great friendship. But it has moved on now,’” he shared. “Unfortunately, he had done what he had done. I wanted to move forward on in my life.

Miles, who was seen showing an interest in co-star Ruby Adler during a party at the cast’s hired Cotswolds home, added: “So it is a pity with how things happened, but I don't necessarily miss the friendship.”

The E4 star joined the series back in 2018 but took a step back from the show last year to “take a bit of a break” and focus on other projects.

Miles then addressed what it has been like returning to the show and living under the same roof as Maeva, 28, who recently hinted James will propose soon.

“It was always gonna be a very awkward situation with Maeva and James when going back to the house,” he said.

“I hadn't seen them for over a year. So, you know, I did think that it was going to be a little bit awkward.

"I didn't think there was going to be that much drama as it has been, as you guys have seen. But, it is what it is.

“It's those sort of situations when you live under a roof with your ex and your ex best mate, obviously things are bound to happen.”

When asked if he would sign up to Strictly Come Dancing and Celebs Go Dating, the fitness guru replied: "I would love to!

"Strictly would be so fun to do.

"I mean… I'm so unlucky in love. Celebs Go Dating would maybe help me with a lot of things. I've been single for three years now. So, if those opportunities arise, I definitely will take them."

Made in Chelsea airs Mondays at 9PM on E4