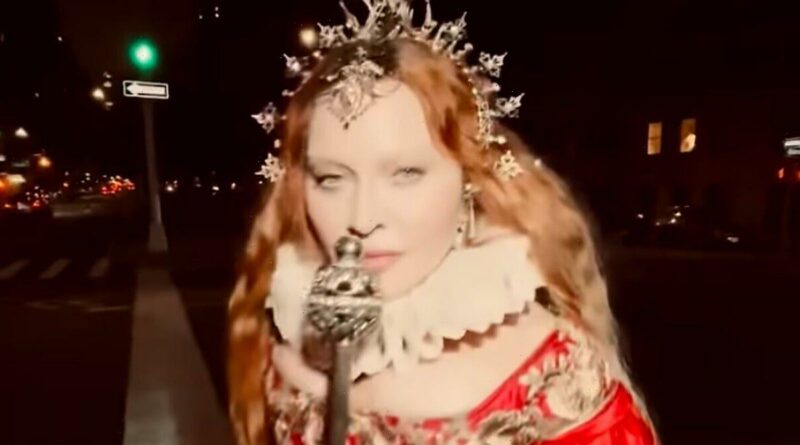 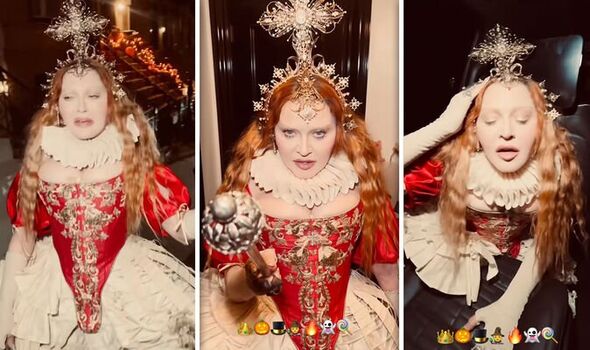 Madonna, 64, wowed her fans with an ornate look for Halloween this year, as the star showed off her glamorous take on historical figure Queen Elizabeth I. The singer traded in her bubblegum pink locks for some voluminous red curls in the breathtaking fancy dress look.

Sharing her outfit with her 18.6 million Instagram followers, the Like A Virgin singer wore a large, white Elizabethan ruff around her neck and a huge golden crown complete with a crucifix on her head.

Continuing with the historical theme, the star squeezed herself into a busty corset-style dress, which featured puffed sleeves and a hoop skirt.

The bodice of the garment was bright red and decorated with an ornate gold pattern.

Below the huge white hoop skirt, which fell open at the front, Madonna wore some white lace pantyhose and fishnet tights.

Madonna, 64, dressed up as historical figure Queen Elizabeth I for halloween

The singer’s outfit included a red and gold corset-style bodice, as well as a large white skirt that fell open at the front.

The pop star wore a large, white Elizabethan ruff around her neck, which figures like Shakespeare also famously wore during that period.

The Like A Prayer singer wore a huge golden crown complete with a crucifix on her head.

The pop icon could be heard saying “off with her head” in reference to the Queen of Hearts from Alice in Wonderland.

The front of the music legend’s dress showed off her white pantyhose and fishnet tights.