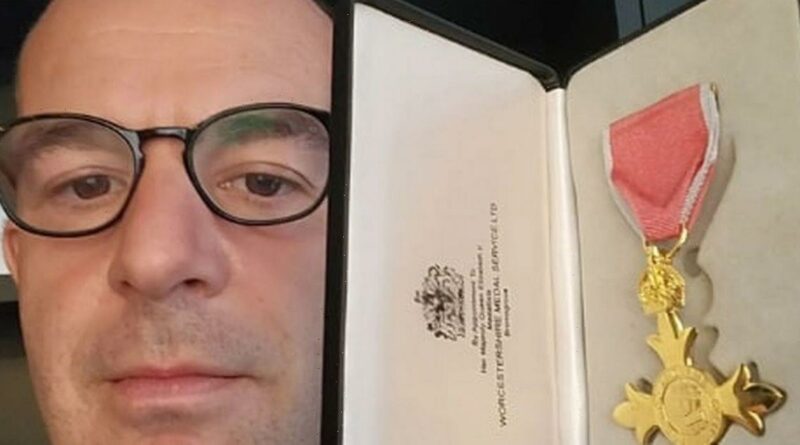 Money Saving Expert Martin Lewis has revealed that he was forced to give back his OBE after having it “taken” from him.

The journalist and TV personality, who offers Brits advice on dealing with the cost of living crisis, was appointed Officer of the Order of the British Empire (OBE) in the 2014 Birthday Honours for services to consumer rights and to charitable services.

At the start of 2022, Martin, 50, was awarded a CBE for services to broadcasting and consumer rights in the Queen's New Year Honours.

On Monday, the Good Morning Britain regular shared a photo of his OBE and wrote: "They're taking my OBE off me! Yep, I got a letter saying now I have been upgraded to a CBE, I need to send the OBE back."

Quite the upgrade, indeed!

On the same day, Martin appeared on Good Morning Britain alongside Susanna Reid to offer advice to Brits calling in with questions on everything from mortgages to energy prices.

"If mortgages are going up, what does that mean for people who pay for their properties? Are rents going to go up too?" one viewer asked Martin.

The word “rent” made the financing expert put his head in his hands.

After a brief pause, he said: "Probably. You would assume that many people who own properties have mortgages on them so their costs are going up and they will want to pass them onto consumers.

"You can also assume that less people may be buying which will put more people into the rental market."

He then added: "On the other hand, we have a cost of living crisis where people have less money so they may be willing to pay less for rents which could drive prices down.

"I'd probably go with the first option as most prices are going up so renting prices are likely to go up but we are not in a period of certainty at the moment."

Sadly, many viewers said their rent was already going up.

"My council wrote to say they potentially will be raising my rent in line with inflation plus 1%, a total of 12%,” one person tweeted.

Another Twitter user wrote: "Rent has already gone up its not just a case of eat or heat its also how do you eat or heat when you can't afford the rent to keep the roof over your head, unfortunately this is now the case for a lot of families disabled carers etc something needs to be done to help."