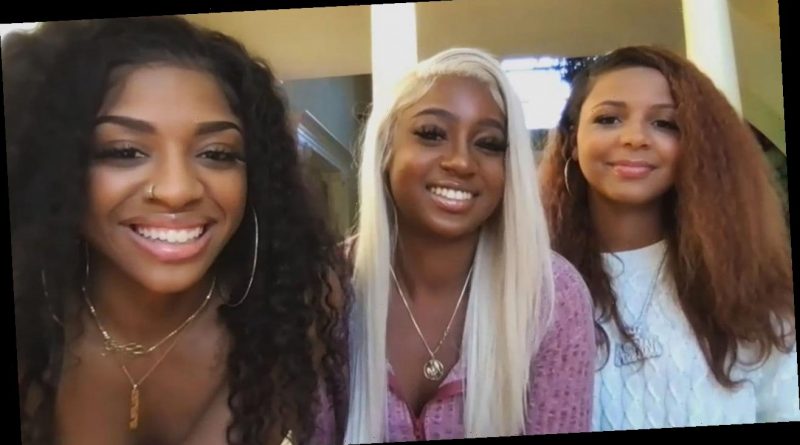 The next big thing in the TikTok world is coming out of Atlanta! That’s where the Collab Crib, a Hype House-style pad filled with Black content creators, is located.

But there are many things that set this collection of creators apart from the L.A. houses. Three of the house’s top stars — Kaelyn Kastle, Kaychelle Dabney, and Queen Khamyra, whose full name is Khamyra Sykes — opened up to ET’s Melicia Johnson about how they’re making a name for themselves on the platform.

Kaelyn is a 24-year-old singer from Bermuda, who decided to try her hand at social media.

“Everyone was kind of discouraging me from TikTok, but I had this vision that this app was going to be monumental in the music industry,” she tells ET. “So I was like, I want to get on this app. So I started dabbling and my first TikTok was just, like, random. I was like, I’m gonna just post this, literally just a random moment and that’s from there.”

Kaychelle is a 22-year-old aspiring actress from Baltimore, Maryland. Similarly, she found her start and initial success on TikTok to be unexpected.

“I made an account and I didn’t have any followers and nobody followed me. So I was like, oh, nobody gonna see this and I just thought posting, like, something crazy and people saw it. I’m, like, watching my videos and then, like, I kept posting. It was just going up after that and just took off. It was literally by accident but, like, that’s how I started showing my personality more and people loved it.”

As the youngest member of the house, 14-year-old Queen Khamyra has been in the social media game for years.

Together, the trio, along with their fellow Collab Crib creators, is looking to share their own unique spin on the TikTok revolution from within their own creative environment.

Kaychelle describes the house as “very versatile.” And as for the love triangles and drama of their West Coast counterparts, the Collab Crib hasn’t suffered, thus far, from the same fate.

“I would say mostly like the way that Keith — our manager, Keith Dorsey — structured the house, he really took time to, like, put the science together of what personalities would blend,” Kaelyn says. “So I wouldn’t say we have drama, per se. I would just say we have more, like, a family dynamic, you know, when your family, your brothers and sisters argue but it’s still kind of just like the overall. Yeah, it’s overall love, and we all have the same goal and the same mindset to a certain extent. So when things are arising or happening in the house, we kind of all attack it and handle it in-house.”

In addition to the lack of drama in the house, it’s the drive that sets these creators apart.

“What makes us different, per se, more so is our energy. I feel like we didn’t come here asking for any– we don’t want handouts, you know, not that any other houses do,” Kaelyn explains. “It’s hard to separate the fact that we’re Black but, you know, Black people, we have to work a little harder for everything, so we already knew that we’re not being set to the same benchmarks and standards as most of these, all the houses, are.”

Members of the Collab Crib have taken their platforms and used them to help invoke change. During Georgia’s Senate runoff election, they publicly went to the polls, making TikToks to help support Democratic candidates Jon Ossoff and Raphael Warnock.

“We did it, we did it. Yeah, so pretty much we joined along the whole election, the Senate election,” Kaelyn shares. “We were part of the campaign, and yeah, worked hard. We worked hard for them votes, OK, honey!”

As for whether they’ll eventually move on and expand to other cities, the creators remain open, but focused on their work in Atlanta for the time being.

“It’s definitely a possibility, but I feel like we need to grow and work on our foundation here first before we can branch out,” Kaelyn says.