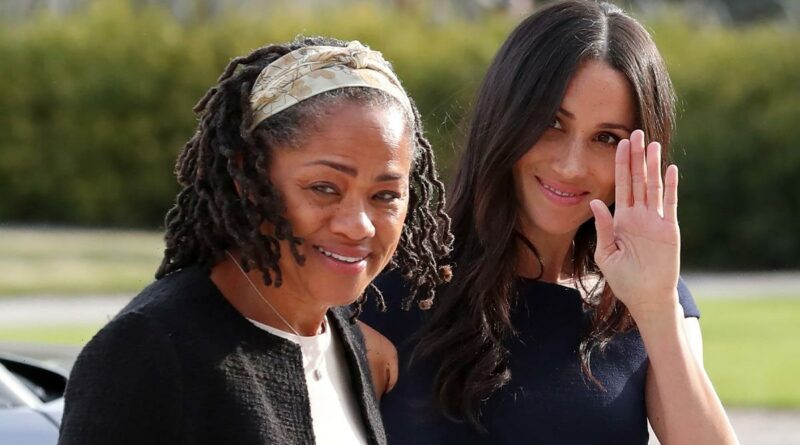 Meghan Markle‘s parents Doria Ragland and Thomas Markle tied the knot back in 1979 – and Doria looks remarkably like the Duchess in unearthed photos.

The couple opted for a bohemian wedding day and The Mail on Sunday reported the details of their relaxed nuptials, including what the bride and groom wore and where they chose to say ‘I do’.

WATCH: Everything you need to know about Meghan Markle’s mother Doria Ragland

Their venue of choice was the Self-Realisation Fellowship Temple on Sunset Boulevard in Los Angeles.

The bride opted for a white buttoned up shirt and skirt combo and placed pretty white flowers in her hair – all in all she looked beautifully boho.

Doria was 23 years old at the time, and she looked fresh faced in the candid photographs obtained by the The Mail – and she looks so similar to daughter Meghan.

Thomas also kept his look on the smart/casual side with a tweed-looking blazer, orange shirt and dark tie.

The Duchess of Sussex’s uncle, Joseph Johnson spoke to the publication to reveal: “It was a lovely wedding but not conventional at all.”

Their daughter Meghan was born two years after the marriage, but the couple divorced when Meghan was six years old.

Thomas Markle has spoken out about his marriage breakdown

In Channel 5’s documentary Thomas Markle: My Story, Meghan’s father spoke about his marriage, saying: “It went well for a while, but I wasn’t home enough. Doria had other interests as well. What was going on in that household at that time wasn’t making me happy.

“So at first she wanted to move back into the city and that is what happened. Then we divorced after that.”

Thomas was also married to another woman called Rosalyn before Doria which lasted from 1964 to 1975.

In that now-famous moment, Doria sat alone at Meghan Markle’s royal wedding to Prince Harry and we wonder if she compared it at all to her very different boho wedding in the seventies.

It is believed that the mother-of-one Doria is now single and she currently lives in a house in the View Park-Windsor Hills neighbourhood of Los Angeles. It is just under a two-hour drive from the Duke and Duchess of Sussex’s huge Montecito mansion, so we are sure the grandmother gets lots of visits from her grandchildren Archie and Lilibet.