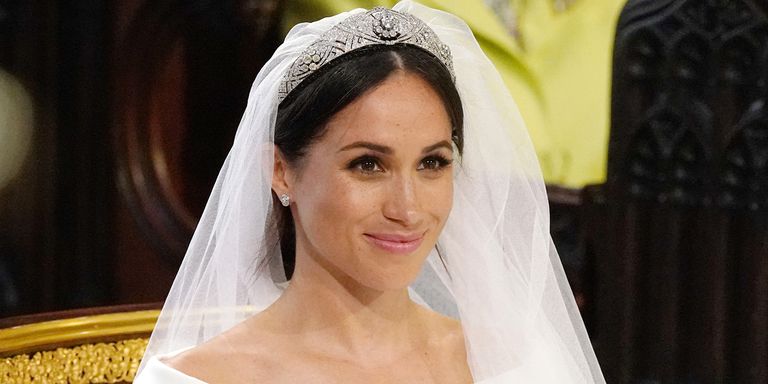 Meghan Markle arrived to Windsor Castle for her wedding to Prince Harry in Queen Mary’s Filigree tiara—the most breathtaking headpiece we’ve seen since The Duchess of Cambridge’s Cartier Halo Scroll Tiara in 2011.

As its name suggests, the tiara originally belonged to Queen Mary, and is a classic, antique piece that has long been a part of the royal collection. It’s likely that Meghan chose the tiara thanks to the way that it fit and worked with her wedding gown by Givenchy, and given the simplicity of the gown’s neckline, a statement piece like this tiara is a welcome addition to her quintessentially royal look.

In the months leading up to the wedding, many speculated what tiara Meghan would wear for the big day, with many feeling that she might’ve borrowed a piece from the Queen’s crowned jewels or from the Spencer Family. It turns out Her Majesty did loan Markle the headpiece, which is also known as Queen Mary’s diamond bandeau tiara, Kensington Palace announced.

“The diamond bandeau is English and was made in 1932, with the center brooch dating from 1893,” the palace detailed this morning.

According to an official statement: “The bandeau, which is made of diamonds and platinum, is formed as a flexible band of eleven sections, pierced with interlaced ovals and pavé set with large and small brilliant diamonds. The centre is set with a detachable brooch of ten brilliant diamonds.”

The tiara was originally crafted to highlight that brooch, which was first given to the former Princess Mary by County of Lincoln when she married Prince George, Duke of York in 1893. Queen Elizabeth II inherited the headpiece decades later in 1953.