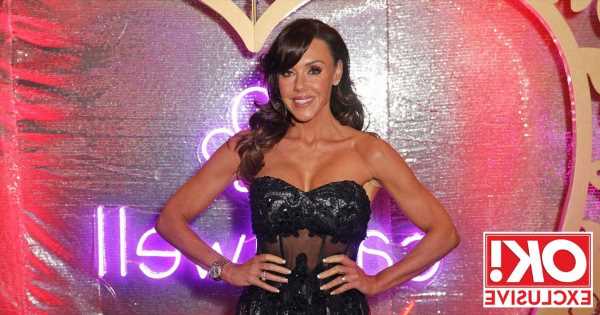 Michelle Heaton has revealed how a Loose Women star helped her through her difficult time in The Priory.

Michelle, 42, entered the rehab facility to receive treatment for alcohol addiction earlier this year, but was initially unsure how she felt towards the 12 step programme.

The star – who sat down with husband Hugh for a festive OK! shoot this week – has explained how Denise Welch told her about the programme and how it could help her.

She told us: "I spoke to Denise Welch quite a bit when I was in The Priory and I was so scared about the 12 steps – but it’s not scary at all.

"It’s just a way of life and my way of life has to be that to stay sober. I do have to put in a lot of work."

The star also opened up about how Denise taught her what a "black out" was when she finally sought help.

Denise has been open about her own struggles with addiction and has now been sober for nearly ten years. Michelle said: "A lot of times, I was in what they called 'black out', it’s Denise Welch who taught me what it is. I thought it meant passed out. It’s when you are being but your mind blanks out so you have no memory of it."

The star gave an honest interview with OK! this week about her first sober Christmas.

“I feel like this year my life has changed for the best,” Michelle explained. “Next year isn’t a new start, but a continued journey of what we’ve picked up this year.”

The star added that she feels "great."

"I’ve been experiencing things in a different way. Even down to sleeping, as they had to teach me at the Priory how to go to sleep at a regular time as I had no routine. But I feel great."

Michelle detailed her battle with alcohol and drug addiction earlier this year after it was revealed she had entered rehab after a three and a half year battle.

After finding sobriety, Michelle is in a better place than ever.

She said: "I still suffer with problems with my pancreas and have to take medication, but my liver is fully repaired and I’m really healthy. I enjoy food, and life is so much better. It’s clear, I’m not looking through a haze now.

"It didn’t happen overnight, but I can appreciate things. I used to hate the word 'content'.

"When Hugh used to use it I’d go mental, as I’d think it meant settling. I’d argue with him. Now I understand what content means – it’s serenity and having peace. I believe I’ve got that now."

For more celebrity exclusives and interviews, sign up to our daily OK! newsletter.