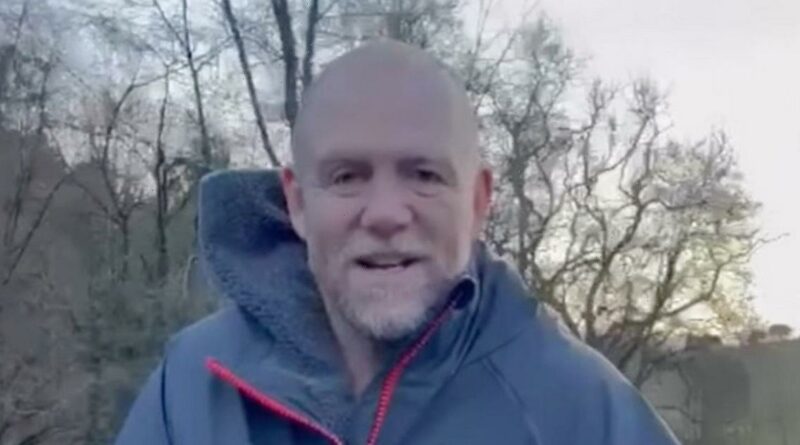 Mike Tindall did his bit for charity as he jumped into a freezing cold lake on New Year's Day.

The former pro rugby player and one of the stars of 2022's I'm A Celebrity has signed up for six weeks of fundraising for Doddie Aid, which was set up by rugby union player George 'Doddie' Weir to raise funds for research into Motor Neurone disease, which he battled for six years before passing away in November 2022.

Dad-of-three Mike, 44, stripped down to his favoured budgie smugglers – in a shade of bright blue – as he dove into a freezing cold lake with two other budgie smuggler-wearing pals.

Before he stripped off, Mike spoke to the camera, which appears to have been held by his wife Zara, 41, as he said: "Happy New Year everyone. The first of January.

"It's not that cold… It's a little bit cold. We're down here at the lake and it's time for the Doddie doo."

As he took off his coat, Mike said: "Now, being me, it obviously had to be…" before the video cut to him in his swimming pants.

With the person behind the camera giggling, Mike said: "Sorry, it's a bit nipply out here," before wading into the cold water and diving in.

There was more laughing as the men screamed in the water, before she said: "Oh my god."

There was then a picture of the three men from behind as they wrapped their arms around one another and looked out to the lake.

In his caption, Mike wrote: "Great way to start the year with a little dunk for @doddie_aid #doddieaid2023 before heading to Cheltenham, was a little chilly in there!!! Now it’s time to get the miles in!"

His followers were quick to comment, as one wrote: "Bonkers! Wish I was that brave. Happy New Year to all of you xx"

Another wrote: "Excellent well done one and all .Happy New year to you all and all the families Doddie was a legend."

Speaking about the charity challenge in an earlier Instagram video, Mike said: "Doddie Aid is back…I've just signed up and re-downloaded the Doddie Aid app.

"It's basically a six week challenge. Get as much mileage in you can, sign up as a family, encourage the families to get out there and do their miles, all raising money for the great man who obviously sadly passed away a couple of weeks ago.

"It's a massive year for him…it's a year to honour him as much as we possibly can.'

"Hope you can all join in raise huge amount of money for such a great cause.

"Let's do it together. Let's do it positive. It's great. Exercise is great for the brain as well as the body. Enjoy that and start off in the right way."

Doddie passed away during Mike's stint on I'm A Celeb and at the time, the team running his Twitter account said Weir is “someone who meant a lot to him”.

“We know Mike will be very sad about the passing of Doddie Weir. Someone who meant a lot to him,” they wrote.

“On behalf of us all we would like to pass on our condolences to the Weir family.”