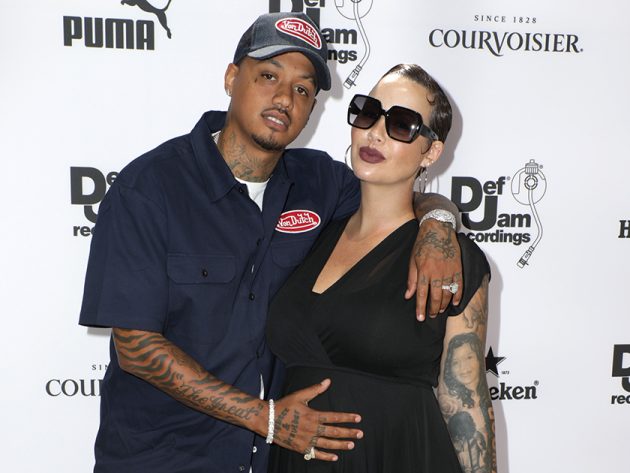 It has been confirmed that the model and actress has given birth to her second child.

Taking to Instagram to announce the exciting news, the mum-of-two’s partner music executive Alexander ‘AE’ Edwards posted a sweet photo of him cradling the pair’s newborn son who is swaddled in a blanket.

Alongside the adorable snap, which shows the new dad kissing his sleeping baby son on the forehead, the rapper revealed what the pair had decided to name their new little one.

He captioned his post, ‘Slash Electric Alexander Edwards.. the world is urs now ❤️ thank u @amberrose for loving me so much that u put ur body thru it 2 bring my sun in2 the world. I could never be as strong as u. Slash a rockstar ❤️’.

The post raked up nearly 30,000 likes in just a few hours and fans and friends flooded the post with messages of congratulations.

MORE: Kylie Jenner responds to rumours she’s back with Tyga as she confirms split from Travis Scott

‘This is awesome,’ commented another follower. ‘Congrats on meeting your son ⚡️’.

The new arrival is the first child for music exec AE, while Amber is already mum to six-year-old son Sebastian Taylor Thomaz, who she welcomed with ex-husband rapper Wiz Khalifa back in 2013, just a few months before the pair tied the knot.

Amber filed for divorce back in September 2014. She and AE met back in 2015 but started dating last year.

She announced her pregnancy back in April, with a sweet photo on Instagram of her getting a scan done.

Earlier this year she took to her social media to open up about her relationship with partner AE.

Branding him her ‘best friend’, she wrote ‘We talk for hours, he makes me a better person, he listens to me and understands me.’

‘He also came into my life at a time where I’ve had enough of the narcissistic, cheating and abuse I’ve endured over the years from my previous relationships.’

‘I felt so damaged when I met him and pushed him away in the beginning, he has talked me through everything while simultaneously loving me and working with me so I could overcome my fear of loving someone in the most healthiest way again.’

Big congrats to the pair on their new arrival!