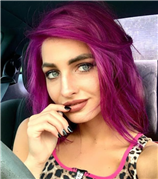 When it comes to Moriah Plath, that is.

The teenage daughter of Kim and Barry Plath — who stars on the aforementioned TLC series and who has moved away from her VERY controlling parents and into her own home — just showed off a new, loud and assertive fashion statement.

As you can tell above and below, it centers on Moriah’s head.

In the same snaphots, Moriah rocks some dark eye shadow and has painted her lips bright red, accessorizing her fresh and unique look as only she can.

Moriah stars alongside her loved ones on Welcome to Plathville, but she broke away from her mother and father years ago.

Kim and Barry raised their kids with limited technology, a ban on sugar… and on a pretty isolated farm under a pretty strict fundamentalist Christian lifestyle and belief system.

It may have worked for some of their children.

But it didn’t work for Moriah, who now lives with her brother in a rented Cairo, Georgia home.

Moriah and Micah gave fans a glimpse of their new home on the Season 2 premiere of Welcome to Plathville, while also opening up about her fractured relationship with her parents.

“In the last six months so much has changed,” she said on air at the time.

“I moved out of the house slash got kicked out.

“I had got to the point where I was just starving for freedom and didn’t follow the rules my parents had set.”

Added Moriah back then:

“My parents were shielding me or protecting me, whatever, from the outside world.

“They tried to control literally everything, what we ate and wore. Jeans or any type of tank top were out of the question. Swim suits were an absolute no.

“I felt like an outsider in the real world. I didn’t feel normal.”

Moriah, meanwhile, remains close with sister-in-law Olivia Plath — even though the latter doesn’t really talk to her mother and father-in-law at all, really.

Could Moriah’s brother, Ethan, and his wife, Olivia, ever make up with Kim ndd Barry?

Bur Moriah has her doubts. Her extreme doubts.

“Like, [it seems] just so far-fetched to me,” Moriah said this summer about a reconciliation between her brother and parents.

“I’m not saying it’ll never happen, but, and I have a feeling if they got to the point where [they were], like, yeah, ‘We can talk again,’ I have a feeling there would still be some clashing.”

Not that Moriah seems to care very much either way.

She’s just out there, dyeing her hair and living her best life.