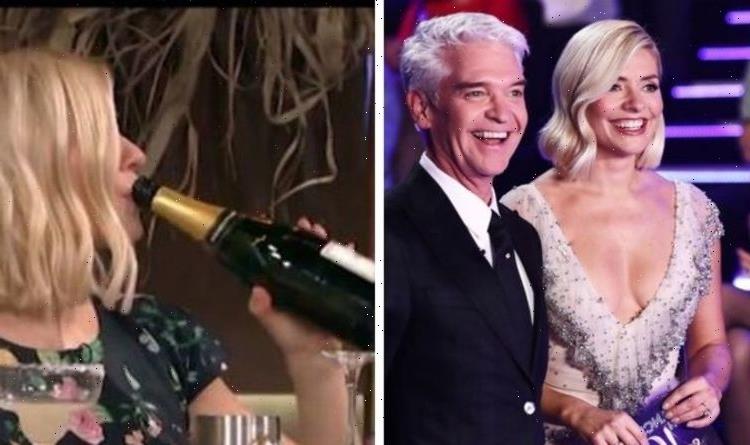 This Morning: Holly and Phillip return for 2022

TV host Holly Willoughby has admitted to smuggling gin into the ITV studios for herself and Phillip Schofield to cope with a “stressful” Dancing On Ice 2021 final. With Covid eliminating any chance of a wrap party, a determined Holly decided to take matters into her own hands.

The 40-year-old might have seemed composed on the night, but behind-the-scenes, she felt she needed to treat herself to a gin and tonic.

“I snuck in two of my kids’ water bottles with their names on,” she confessed of the cunning strategy.

“Nobody could see what was inside, and I filled them up with gin and tonics, one for Phil and one for me.

The last series had been increasingly fraught with tension, after Denise van Outen, Billie Faiers, and Jason Donovan all bowed out due to injury.

In light of the catastrophes, Phillip recently admitted he had been banned from hitting the rink himself out of fears he would lose his footing and succumb to injury too.

Holly was forced to share the sad news that 47-year-old Denise van Outen had suffered a dislocated shoulder and three bone fractures barely two weeks into the competition.

Shockingly, she battled through the pain and continued skating for 15 hours after the dislocation so as not to “bother” the NHS.

Soon afterwards came 31-year-old TOWIE star Billie, who had a terrifying head injury and, finally, 53-year-old Aussie actor Jason Donovan, who made it to the sixth week of action before a back injury ended his Dancing On Ice dreams.

The string of injuries, together with contestants testing positive for Covid and reserve participants having to be drafted in at the last moment, all caused stress and anxiety for Holly.

Baby-faced Emmerdale star Joe-Warren Plant and his pro partner Vanessa Bauer both succumbed to the virus and were forced to leave amid fears the entire series would collapse if Covid spread any further between the cast.

Meanwhile, the show was unnervingly quiet, as due to social distancing restrictions, it was filmed without a live studio audience.

However, it was nothing that a stiff G&T wouldn’t solve.

Holly was quick to point out to MailOnline: “We don’t do this on every ad break but for the final there was no wrap party and after the last series we all needed it.”

Meanwhile, Phillip was careful to avoid the rink after being warned of liability issues ever since he first began hosting the show.

Claiming that only the very young can be fearless on the rink, “when you know [a bone isn’t] going to break”, he has stayed away from the action and stuck to presenting from the sidelines.

The new series should be relatively stress-free, as contestants no longer have to form an isolation bubble with just their partners for company, while high vaccination rates mean Covid is expected to be less of a threat this time around.

Judge Christopher Dean elaborated: “This year the celebrities have gone through the process of getting introduced to the ice longer [too].

Dancing On Ice – complete with celebrities such as Liberty Poole of Love Island and Sally Dyvenor of Coronation Street – will soon be back for 2022, debuting on January 16 at 6:30pm on ITV.