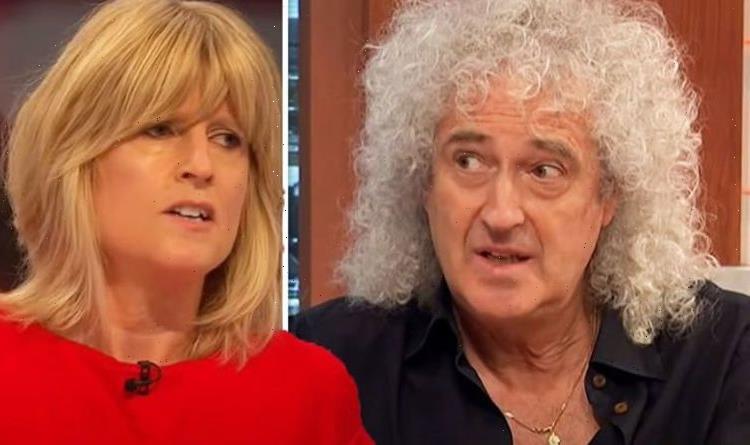 Queen’s Brian May shocked as house is flooded by sewage

Queen guitarist Brian May, 73, has hit back at Prime Minister Boris Johnson’s sister Rachel Johnson, 55, after she took to social media to claim that the musician was blaming recent flooding on “double basements”, while having one of his own in his Kensington mansion. Following the recent floods in the country’s capital, the musician revealed earlier today that the bottom floor of his West London house had been flooded with black sludge and relayed the “heartbreaking” damage the freak weather has had on his property.

The devastated Queen legend said not only had it ruined his rugs and carpets in his home, but all of his childhood photo albums had been damaged, as well as his wife Anita Dobson’s memorabilia.

However, the legendary musician soon spotted a tweet from Boris Johnson’s sister which accused him of blaming the weather problem on double basements in his neighbourhood, while having one himself.

In view of his 2.8 million Instagram followers, the star didn’t hold back as he corrected the journalist and claimed to have “no idea” who she was.

He wrote: “I have no idea who Rachel Johnson is – but someone should tell her (on Twitter) that if she’s gonna be a clever tweet she needs to get her facts straight.”

Brian went on to clarify that his central London home does not have a double or single basement, while going on to explain how new additions to homes can cause huge disruptions to surrounding residents’ properties.

“I have never had a double basement, or even a single one. I have a lower ground floor which came with the house,” he added.

He went on: “If that needs explanation, it sits about half a floor below street level, while the upper ground floor sits just above it.

“That’s the way these houses were designed in the last century.”

“In contrast, many of the basements ADDED over the last few years project two or even three stories into the ground and cause severe disruption to the water table and the area’s ability to drain surface water.”

The star went on to blast homeowners who decided to install a below-ground basement because of the nuisance that it posed to the surrounding neighbourhood.

Brian stated: “I would NEVER put my neighbours through the four-year Hell of adding a basement as an extension to an existing property.

“People who do this are a menace to decent residents. Kensington has been wrecked by the RBKC’s policy of allowing these works to compromise our quality of life,” he added.

The star finished by suggesting that the journalist take her complaints to Kensington council, rather than airing them on social media.

“If you want to do some good in the world, Ms. Johnson, why don’t you redirect your smart comments towards the borough council. Bri,” he signed off.

The husband of former EastEnders actress Anita Dobson was reacting to a tweet by Rachel Johnson, who claimed that the musician has a double basement.

The author wrote: “I hate double basements so much I wrote a whole novel – “Notting Hell” – about them.

“Amusing, then, to see Brian May blames floods on the undoubted “plague” of double basements in Kensington & Chelsea… from his own mega double basement,” she penned for her 60,800 followers to see.

Earlier today, the Queen star took to social media to reveal the extensive damage that the sewage overflow had caused to his property.

As he walked through his house, Brian filmed destruction which he described as both “disgusting” and “heartbreaking.”

In his post, the musician blamed the flood on the local council, claiming that by allowing basements to be built over the last decade, they had rendered the drainage system “ineffective.”

A Kensington and Chelsea Council spokesperson said: “Our priority is to make sure residents who have been affected by last night’s flooding have the help they need. Overnight we have placed 120 residents in emergency hotel accommodation and are making emergency repairs this morning.

We are making welfare calls to vulnerable residents and have set up a centre at The Curve in North Kensington where Council officers are on hand to support people affected.

“Flash floods have affected boroughs across London after sudden and torrential rainfall. This is causing damage and disruption across the city, not just here in just here in Kensington and Chelsea and is not linked to basement building.”