Home » Celebrities » Nicki Minaj Is Dating Eminem Now & Who Even Saw This Coming?

We all know that Instagram is the place to go to confirm that your ex is dating someone new. Apparently, Instagram is also the place to go to confirm that Nicki Minaj is dating Eminem. Yes, for real. In a random but awesome move, Nicki Minaj has confirmed to a fan that she’s dating Slim Shady via a comment reply on the social media platform. Um, what is 2018?

The 35-year-old rapper posted a video to her Instagram account to promote YG’s new single "Big Bank," which she features on along with 2 Chain and Big Sean. Her caption reads "Told’em I met a Slim Shady. Bagged a EM!!!" which is a lyric from her feature on the track. 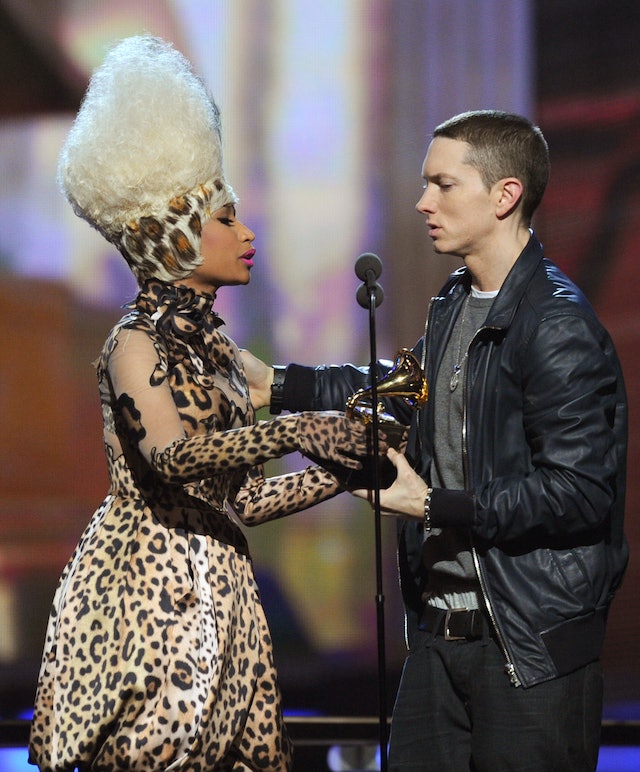 While the relationship is a strange one, dating a rapper is not off-brand for Nick. In the past, she’s has been linked to other rappers, most recently Nas, whom she split from in December 2017 after six months of long-distance dating. She also dated rapper Meek Mill for two years from 2015 to 2017.

Last year in an interview with Ellen DeGeneres, Minaj said: "I’m just chilling right now, I’m celibate. I wanted to go a year without dating any men, I hate men. But I might make an exception to the rule for him," referring to Nas.

But Eminem’s dating history is far more private, you know, aside from his much-rapped about ex-wife Kimberly Scott. (Oh boy, remember that?) In a 2017 interview with Vulture, Marshall Mathers explained, "Since my divorce I’ve had a few dates and nothing’s panned out in a way that I wanted to make it public. Dating’s just not where I’m at lately." Hmm, sounds like a certain woman who spoke on Ellen’s show…

In the same interview, when David Marchese asked Eminem if he used Tinder, he replied, "I mean, yeah," before adding that he also used Grindr. And met women at strip clubs. So who knows! But if Nicki and Eminem met on Tinder, I’m fully here for it.

Interestingly enough, Em was not Nicki’s date to the Heavenly Bodies-themed Met Ball this on May 7, 2018, which is a shame, because I would have loved to see his interpretation of the theme.

We will have to stay tuned to see what this relationship is all about… but I have a feeling it’s going to lead to some excellent lyrics.