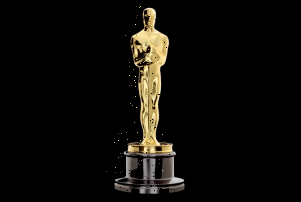 The Oscar nominees luncheon is always a feel-good event where everyone in the room is still a winner, happy to see their category rivals and others, and the one time in a tense season where they can just lay back and have a great time. 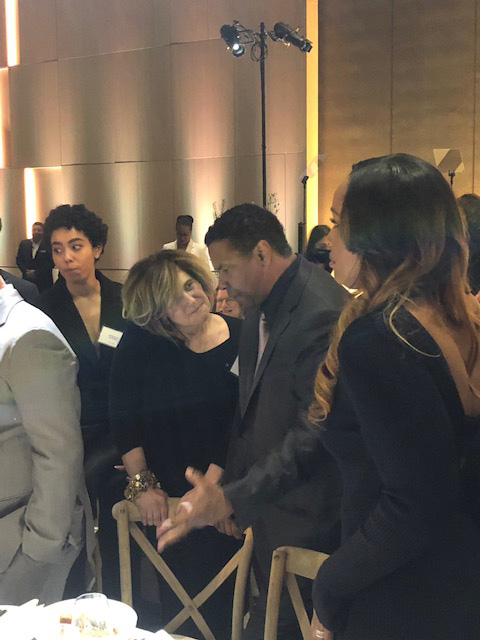 “For me this is just a fun thing to go to. People talk about is it Will [Smith] or me or Andrew Garfield. It could be anyone, but I am just happy at this point to be invited to the party,” Denzel Washington told me Monday as he waited for his car after the luncheon for nominees of the 94th annual Academy Awards. He also noted that the live music being spun by the DJ just made it all that much better as he practically danced up to get his photo taken with other nominees.

You could tell in this room everyone was happy, and in fact every branch and every nominee here was treated absolutely equally — neither Oscar show producer Will Packer or Academy of Motion Picture Arts and Sciences president David Rubin made any remarks about the controversy over pre-recording eight categories and presenting them in the hour before the ABC telecast, where they will be weaved in with some editing.

This day was all about celebration, and after a miserable Covid year where the luncheon for the 93rd Oscars had to be canceled, this event was packed, most attendees maskless (but vaccinated and tested), and it felt like old times. This is one of the best events of the year and the Academy pulled it off in style at the new venue in the Fairmont Century Plaza in Century City. 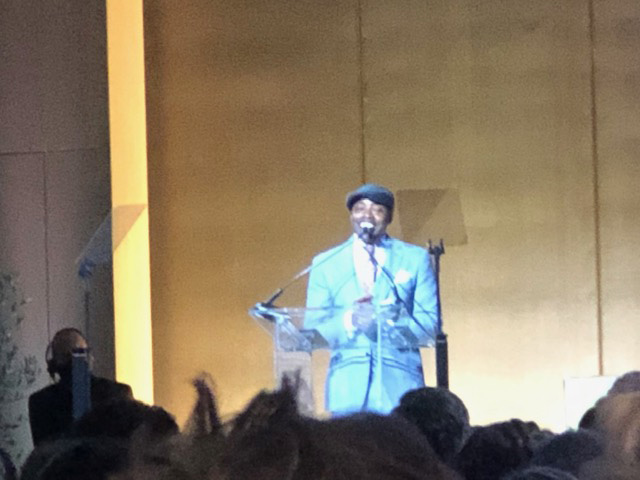 Packer takes the prize for the liveliest comments I have ever seen at one of these lunches, coming off more like a stand-up comic than the person who has the weight of a sometimes bloated show on his hands. “Hey there’s Questlove over there…and how about that Will Smith who is here in the room today? They call him the other Will!” It is a thankless job in many ways, but if the spirit and vibe he brought to the room is any indication of what his plans are for the actual Oscar show March 27, we could be in for a fun night. In conversation after conversation the same sentiment kept coming up: Isn’t it great to be back among people again? It was if we all just collectively emerged from a two-year hibernation.

Packer offered some advice on what he is hoping for in speeches, especially from those who have never been part of the Oscars before. “I have just a couple of thoughts for you first-timers — you’re welcome,” he said. “They don’t know your agents, they don’t know your managers, your lawyers or any of the other moochers that you pay a percentage too. Frankly the audience doesn’t care. But you know what they do care about? They care about you, they care about your story, they care about your passion. Lean into that, talk about that. That is accessible from Detroit to Dubai. Also be quick. The time that goes onstage, it comes and goes quick…You got 20% chance of winning. Get optimistic. If you don’t have a speech prepared, you should. I’ve got a speech, and I’m not even nominated. I wrote it in the third grade. They suck, the Academy Awards,” he laughed. 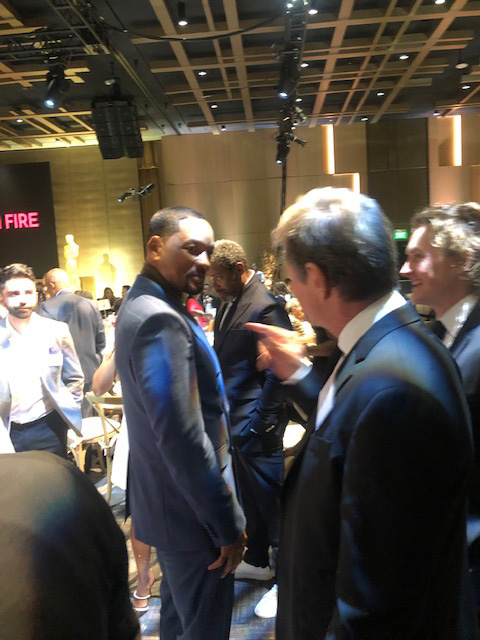 Rubin took a more serious tone in welcoming attendees by first acknowledging the Russia-Ukraine war, and what he termed the Academy’s unconditional support for Ukraine. He then said that we have all been through a lot in the past two years.

“Some of you are first-time nominees, others are veterans of this process, but either way it is an acknowledgement, a realization that your name is joining the ranks of the legends who came before you and who have been part of this great and powerful art form,” he said. “Nominees like Sidney Poitier, Katharine Hepburn, John Ford, Edith Head, Stan Winston, James Wong Howe, Dmitri Tiomkin, Hector Babenco, John Singleton, and so many more. You are now officially a part of Academy history.” 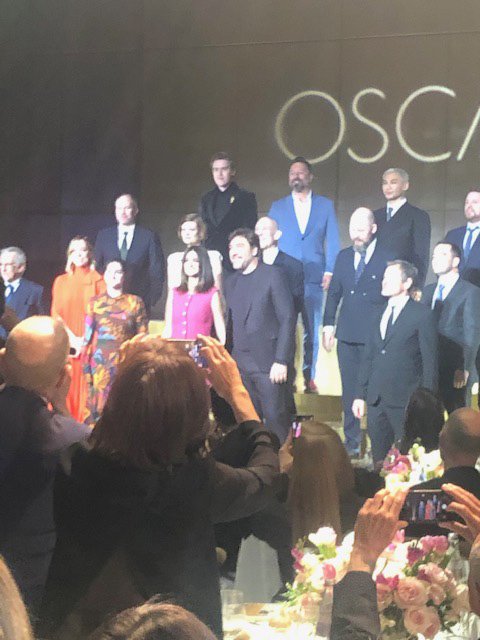 Instead of the usual mass “class photo.,” the Academy did it differently this year, a reminder we still have social distancing on our minds. So in groups of about 20, switching from risers set on one part of the room to the other, actor Alfred Molina called off the rollcall of nominees so that each group got their photo taken and then sat back down, making room for the next group to get in front of the camera. As usual, though, it is always interesting to see just who is getting the biggest applause when their name is called. From my vantage point, King Richard’s Aunjanue Ellis, Questlove, Flee’s three-time nominee Jonas Poher Rasmussen, Ariana DeBose, Jessica Chastain and Will Smith drew some of the most enthusiastic noise, but this isn’t a scientific poll to be sure. 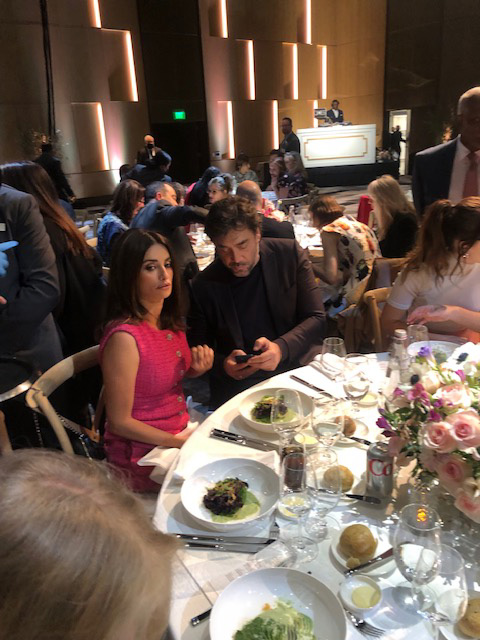 At the cocktail hour you could feel the excitement at this happening again after last year’s deflated Oscar season. Chastain was being congratulated by many for her big SAG win a week ago. She was almost giddy talking about how much champagne she was consuming before her category was called, and shocked to hear her name and just telling herself not to fall. “I would not look good falling,” she laughed.

Penélope Cruz and Javier Bardem, both nominated in lead categories for different films, were one of the hot photo ops in the room as they sat together. “I will see you tomorrow,” Cruz told me referring, to our upcoming taping of my video series The Actor’s Side. Netflix’s Ted Sarandos was just happy to be in the room even though Netflix led the list with the most nominations — so he had lots of reasons to be there. As he approached Belfast multi-nominee Ken Branagh, Sarandos told him how much he and his family loved Death on the Nile. “I am just a real fan as this kind of event,” he said. 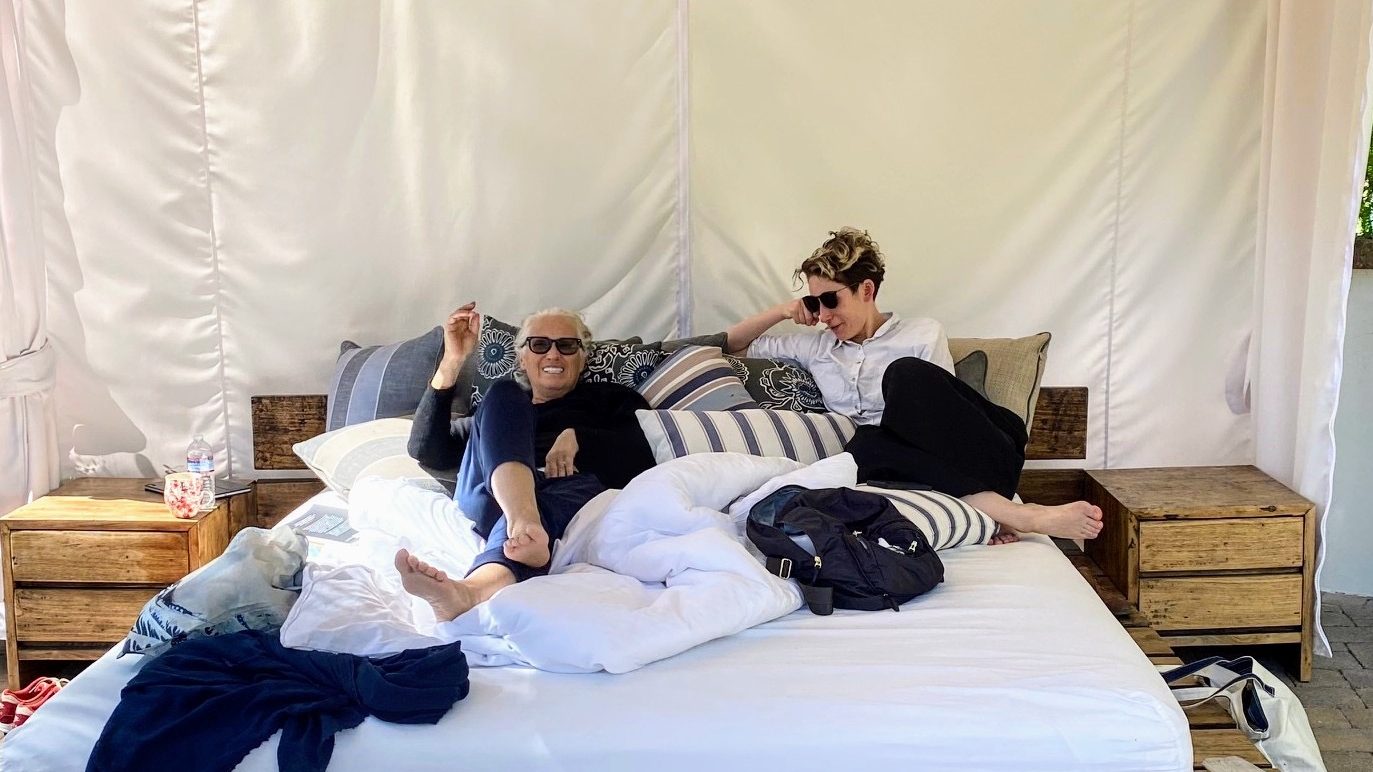 Incidentally, Netflix’s The Power of the Dog is the leading film this year with 12 nominations, but two key players — director-writer Jane Campion and cinematographer Ari Wegner — were sidelined and stuck here in Los Angeles after testing positive for Covid; fortunately, their symptoms were mild. I am told both were bummed not to attend, so Netflix threw a lunch for them today at the rented house Campion where is staying. You can see the photo (pictured, left) — looks like they were having a fine time anyway. Nominated film editor Peter Sciberras made Campion’s presence visible by wearing the white T-shirt emblazoned with her name that Netflix has been handing out. 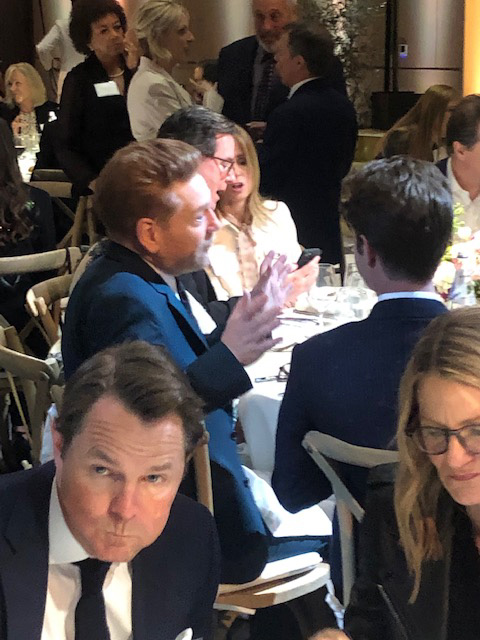 Thirteen-time Best Song nominee Diane Warren, up again this year for “Somehow You Do,” came up to meet Branagh, whose Belfast sports a competing song by Van Morrison in her category. “I know you aren’t going to vote for me but I am so glad to meet you anyway,”  she laughed. This whole lunch has that kind of feeling. No one seems to be rivals on this day. 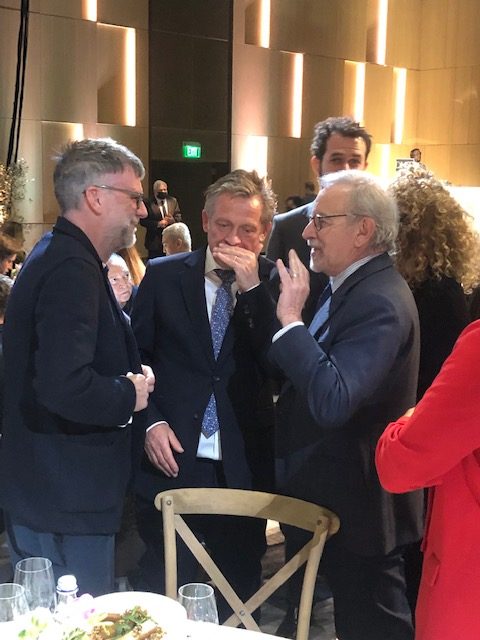 They might have had a more leisurely lunch than three-time nominee for Licorice Pizza, Paul Thomas Anderson, who between sharing stories with Steven Spielberg seated at the next table was hunkered down at his table where most of the food was left untouched by tablemates who were working the room. Anderson, though, was lapping it up. “I totally thought I was coming to a lunch so I didn’t eat earlier. There’s no time to actually eat here. I am starving,” he said as a mass of nominees and others were crowded around lost in their own conversations.

There were many admirers anxious to meet International Feature nominees Joaquim Trier (The Worst Person in the World) and Paolo Sorrentino (The Hand of God). Lin-Manuel Miranda brought his dad this time; last time, when he was nominated for Moana, it was his mother who got to come. It was good to catch up with past AMPAS presidents Cheryl Boone Isaacs and Sid Ganis, plus all the various execs in the room including Jim Gianopolus, Peter Rice, Pamela Abdy, Scott Stuber, the Focus, Neon and Searchlight gangs, and on and on. I spotted Disney’s Bob Chapek talking with Spielberg. Never a dull moment.

As the Academy embarks on changing up the Oscar show itself, let’s just hope they don’t touch this event. Some traditions are fine just the way they are.