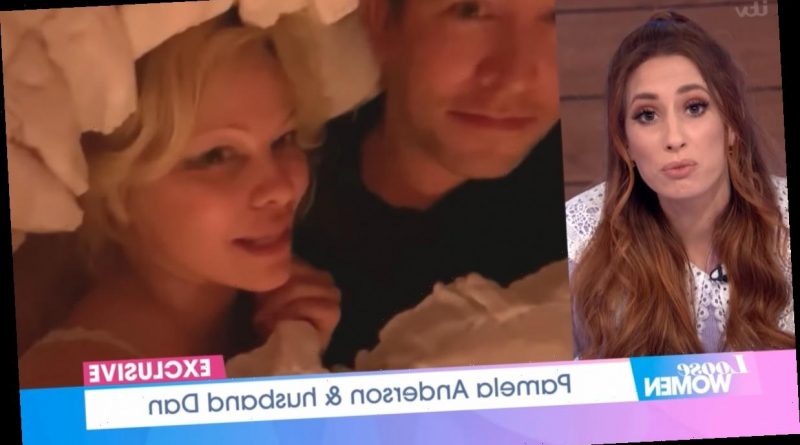 We were shocked last month to learn Pamela Anderson got married again, completely out of nowhere, to a man she met on her property while on lockdown.

The only inside info we got was from her new hubby’s ex — who claimed the Baywatch star had seduced her man and ripped apart their Brady Bunch-style family of five. Now Pam is finally giving fans a peek inside her life with Dan Hayhurst — and everyone immediately has buyer’s remorse in response to the TMI interview!

The Barb Wire star was invited onto Loose Women on Friday morning to tell the story of her surprise matrimony, and it was so uncomfortable. If you’ve ever been around a couple in that honeymoon phase that had no concept of boundaries or, you know, anyone else’s existence and just kept hooking up in front of you like you weren’t there… that’s about the vibe.

First off, the couple didn’t get out of bed. They literally did the whole interview wrapped up in a blanket together. Really, Pam! She told the hosts:

“On the property. He was working here and I got stuck here during Covid and we got together… I’ve been home for the last year and a half renovating. It’s a gorgeous piece of property. And Dan and his kids are living here too. We’re having a good time.”

That kind of leaves out the whole thing where the man had a live-in girlfriend of five years, and the two were basically parents to one another’s children. But you can read all about that side of the story HERE.

Back to Pammy and Danny, who were asked about what drew them together. The 53-year-old former Playboy Playmate said:

“Well he’s a good guy. He’s the kinda guy I would have met if I didn’t go round the girl and get crazy. It’s nice to be with a real man who can actually change a lightbulb. He’s useful. It’s a new thing.”

Comments may be disabled on the YouTube version of the interview, but UK morning viewers let their discomfort be known on Twitter. Here are some of the most grossed out takes:

“OMG I felt so much for the panel members. WTF was going on.”

“OMG the interview with Pamela Anderson is just awful, so unprofessional wtf”

“Please hurry up and move on this interview is excruciating”

“You should of just stopped that interview with Pamela Anderson. It was gross and embarrassing for you all!!! Totally cringeworthy!!!”

But Pam had her defenders, too. One fan wrote:

“Everyone screaming ‘unacceptable’ at Pamela Anderson doing an interview on TV from her bed, like everybody’s social media isn’t full of clips of random people dancing in their bedrooms. Let her live that lockdown life.”

Yeah, people in their bedrooms. Not lying down in their beds, draped around their spouse and giggling while talking about their big penis under the blanket. That’s the type of thing that’ll get you fired from CNN.

What do YOU think about interviews being handled like this??