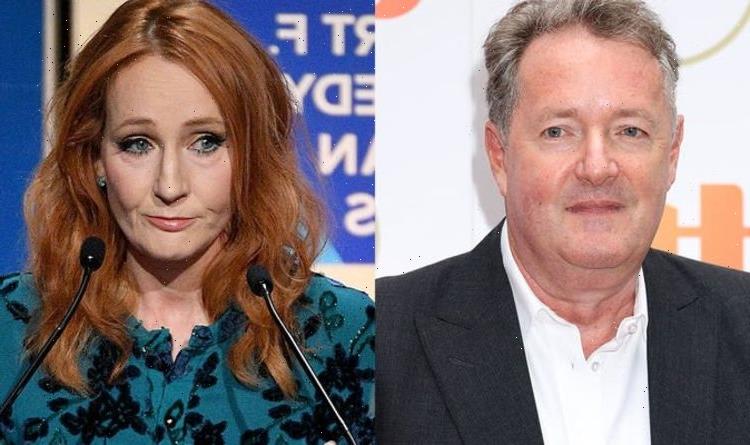 Meghan and Harry: Piers Morgan discusses couple on GMB in 2019

Piers Morgan, 56, called the activists’ behaviour “absolutely disgusting” after they posed for a photo outside JK Rowling’s home, which exposed her address, and shared it on social media to mark the Trans Day of Remembrance. The former Good Morning Britain host defended the Harry Potter author, despite the pair not always being on the best of terms, after she aimed her own “foul-mouthed Twitter venom” against him four years ago.

The author had first received criticism from the LGBTQ+ community last year after retweeting a piece that discussed “people who menstruate”.

Seemingly taking issue with the fact the story did not include the term women, the author wrote: “‘People who menstruate.’ I’m sure there used to be a word for those people. Someone help me out. Wumben? Wimpund? Woomud?”

Since then, Rowling claims she has received so many death threats she “could paper the house with them”.

Piers typed on Twitter in view of his eight million followers: “This is absolutely disgusting, and I say that as someone at whom Ms Rowling has aimed her own foul-mouthed Twitter venom.

“Once again, the woke brigade reveals itself to be the opposite of tolerant or kind.”

In response, presenter India Willoughby defended the activists, as she typed back: “One of JK’s Scottish homes has its own Wiki page – address splashed across The Herald.

“The other is on an Edinburgh tourist site, complete with photo. Plenty of people have their pic taken outside.”

While some of Piers’ other followers also asked him to define the word “woke”.

@Michael71700269 replied: “What this really comes down is that anyone that disagrees with Piers is automatically woke.”(sic)

Others agreed with Piers, as they feared some had forgotten how to engage in a healthy debate.

@AndreaCarlyle2 typed: “It’s out of order.”

While @ScottAndyJones replied: “The world has forgotten how to have a civil conversation/debate.”

The two high-profile figures share an enthusiasm for tweeting and were previously embroiled in a public sparring match back in 2017 when Rowling wrote that Morgan “being told to f**k off on live TV [was] exactly as satisfying” as she had imagined.

He called her “superior, dismissive and arrogant”, while she called him a “celebrity toady”.

Two days later, Rowling tweeted a screenshot of some flattering words, which described her as an “intensely” private, successful author who has encouraged children “to read, feel inspired and be creative”.

“Just been sent this! Could the writer let me know who he is! I’d love to thank him! #Valentines,” she tweeted at the time.

“She would hate to be called a celebrity and guards her private life intensely so she doesn’t play any part of the celebrity game … But by encouraging children to read, feel inspired and be creative, she has had a greater impact on the world than [many other celebrities].”

A “humblebrag” is defined as an ostensibly modest or self-deprecating statement with the actual purpose of drawing attention to something of which one is proud.

Twitter users then delighted in noting that Morgan himself was the author of the description, which was part of his March 2010 list of “the 100 British celebrities who really matter”.

Morgan had placed Rowling at 97.

After a BuzzFeed reporter tweeted that Morgan “didn’t realise” he had written the quote (and that it was the best day of the journalist’s life), Morgan said he was merely questioning his own past judgement over the 2010 list.

“Relax, quarter-wit, I knew what it was. Just surprised I put her as high as 97th,” the TV presenter typed back.