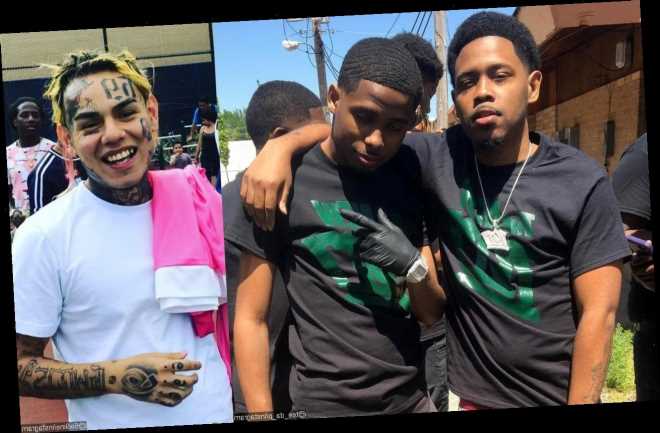 While Drake has sent his condolences to the ‘Back in Blood’ spitter over the loss, the ‘TROLLZ’ rapper makes use of the family tragedy to hit back at the rising artist.

AceShowbiz –Pooh Shiesty has broken his silence on his brother’s tragic passing. The Memphis artist has posted a statement on his Instagram Story, reflecting on the loss of his sibling Tee Da P, who died last week of brain cancer.

“Still wondering where tf that s**t come from,” he wrote over the weekend. “Ig we gotta go out that way we both survived bullets. That s**t ain’t strong as us these pussies will never be able [to] take us out. You ain’t get killed or shot I’m going out [the] same way save my spot go find Treday first.”

In another post, he wrote the hashtags “Do It For Tee” and “Long Live Tee Da P.”

While Pooh is clearly still mourning over his brother’s death, 6ix9ine didn’t hold back in making insensitive comment on the family tragedy. The Brooklyn rapper made use of Tee Da P’s death to hit back at Pooh, after the latter sent out some cryptic comments on a “snitch.”

“It’s 2 types of rats in the world,” the “Back in Blood” spitter recently posted on his Story. He followed it up with, “You don’t got to talk to the police to be a rat.”

DJ Akademiks posted a screenshot of Pooh’s Story posts on his own Instagram account, which 6ix9ine has been paying close attention to. Noticing Pooh’s remarks, the ex-convict appeared to get offended and responded by writing in the comment section, “Didn’t his brother just die?”

Unlike 6ix9ine, Drake has shown his sympathy for Pooh following his brother’s passing. The Canadian star sent his condolences after hearing the sad news. “I just want to send you my condolences, man,” he said in voice memos sent via Instagram. “You know, and just let you know that, like, the cycle of life is unfair, you know? It just hits us so hard. Money can’t change that, you know? Something I just went through, too, with one of my friends.”

Drake also recognized the 21-year-old’s success in his career. “Just know that’s something everybody got to witness and I’m sure they’re all just proud of you, the most love for you in their hearts and that’s something I want you to know,” he continued in his message. “In a tough time like this, realize what you’ve been able to accomplish in this short time and what you have in front of you. I’m wishing you strength in these times, man.”

Tee Da P, who had also released his own rap records, passed away from brain cancer after being hospitalized for months. Pooh and his father reportedly confirmed Tee Da P’s death after earlier reports falsely claimed that he was killed in a shooting.

At the time, Pooh didn’t immediately address his brother’s death, but he canceled his shows to be with his family. “ABOUT THE SHOWS IN COLUMBIA SC AND SAVANNAH CA WE HAD A FAMILY EMERGENCY SO WE COULDN’T MAKE IT LAST NITE BUT WE COT Y’ALL IT WASN’T ON THE PROMOTER WE WILL KEEP YOU UPDATED ON A NEW DATE,” he announced on Instagram Story, without detailing what the “family emergency” was.