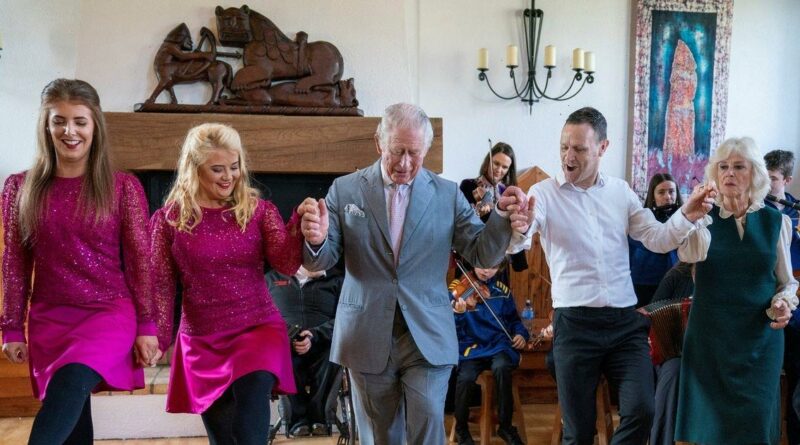 The Duke and Duchess of Cornwall have been showing off their dance moves over in Ireland, where they recently embarked on a four-day royal tour.

Prince Charles, 73, and Camilla, 74, haven't been short of activities during their time in Ireland, having spent time at Superstars Café charity in Cookstown and visited County Tyrone in Northern Ireland.

On the final day of their trip, which is part of the celebrations to mark Queen Elizabeth's historic Platinum Jubilee, the royal couple took to the dance floor to show off their moves.

Charles and Camilla joined a group of Irish dancers on the floor while visiting Brú Ború Cultural centre in Tipperay on Friday 25 March.

Secrets Of The Royal Residences

This special collector's edition of OK! looks inside the hidden tunnels at Buckingham Palace, the spectacular gardens at Highgrove, the Cambridges' town and country retreats and the cosy Welsh bolthole loved by Charles and Camilla.

It explores exactly what it takes to run a royal household, with experts and former staff revealing how they prepare to host state dinners and celebrations.

Plus, discover the history and hauntings of the residences and how you can holiday on the royal estate.

You can purchase the special edition magazinehere for £4.99.


Dressed in a smart grey suit and pale pink tie, Charles put his best foot forward as the dancers showed him the steps of a traditional Irish dance.

Camilla, who wore a stylish forest green pinafore and a white blouse for the outing, looked more at ease as she happily participated in the fun dance.

She could then be seen jumping up and down to the rhythm, as the Irish dancers showcased their impeccable moves.

Charles then partnered up with one of the dancers, who could be seen guiding him as they danced around the room together. The Duke and Duchess of Cornwall also followed in Her Majesty's footsteps as they headed to the Rock of Cashel in Tipperary earlier on in the day.

The pair's visit to the site comes just over a decade after the Queen and her late husband Prince Phillip ventured to the same place.

Charles and Camilla posed for a series of photographs in front of the cathedral ruins, before enjoying a performance by Cashel Community School choir and signing the guest book.

The royal couple were welcomed by the sound of Welsh-Irish trumpets – similar to those used to celebrate the inauguration of kings in ceremonies dating back to the Bronze Age.

A short, specially-composed fanfare was played on the handmade instruments, reproduced using parts found in Anglesey in Wales and Roscrea in Tipperary.

Choir director John Murray said it was "poignant" to have Charles visit the same site as the Queen.

Mr Murray said: "It's rare that you get to sing for two royals, so it is great to get to do that, and the visit is a great thing for Cashel. It's quite poignant that his mother was here."

For all the latest Royal family news and gossip, sign up to our daily newsletter here .