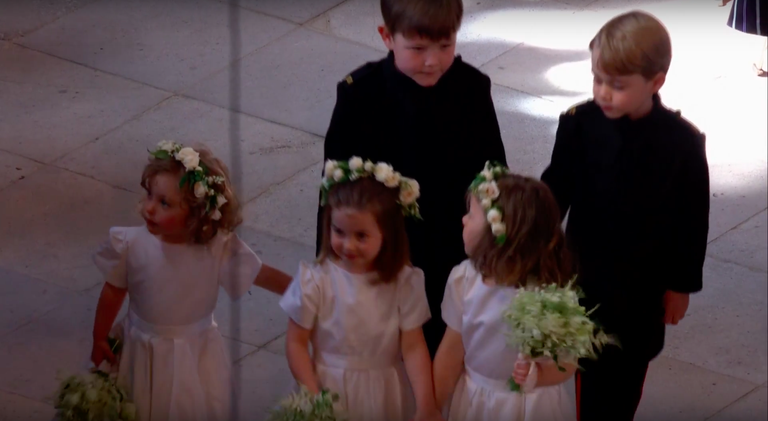 The true stars of the royal wedding are here. Prince George, 4, and Princess Charlotte, 3, have arrived to St. George’s Chapel, and they’re already melting our hearts. The royal tots are participating in uncle Prince Harry and Meghan Markle’s wedding today as a page boy and bridesmaid, respectively.

We cannot get enough of these two:

The brother-sister duo will be joined by eight other youngins for bridal party, including Harry and Meghan’s godchildren and their close friends’ kids.

Despite their young age, George and Charlotte have plenty of (semi) royal wedding experience. The previously served as a page boy and bridesmaid at their aunt Pippa Middleton’s wedding to James Matthews in May 2017.

Though the nuptials were a classy event, the Cambridge siblings still fit some silly moments into the ceremony, like when Charlotte, adorably donning a flower crown, stuck her tongue out to photographers; or when Prince George had a mini tantrum outside the church. We wonder if any shenanigans are in store for Harry and Meghan’s ceremony today.

The royal toddlers just welcomed a new member to the family, Prince Louis, less than a month ago, but the little one won’t be joining them today. The newborn Cambridge will remain at home for today’s ceremony because he’s too young to be out in crowded places. Though we’ll miss seeing him today, he’s bound to have plenty of moments in the spotlight in the near future.

But even without the little prince, we have big siblings George and Charlotte to keep us entertained—and they never fail to do so.