All in good fun! Prince Harry’s best friend, Charlie van Straubenzee, was not afraid to joke about the groom’s past — and recent hair loss — during his speech at the evening reception following Harry’s wedding to Duchess Meghan (nee Markle) on Saturday, May 19.

“He brought up Harry’s tabloid antics and made fun of his hair loss,” a source tells Us Weekly about van Straubenzee’s speech. “The entire room was cracking up.”

Before the 33-year-old prince met Meghan, 36, in summer 2016, he at times made headlines for his partying, including a scuffle with the paparazzi outside a night club in 2004, a controversial Nazi Halloween costume in 2005 and a naked photo scandal in Vegas in 2012. 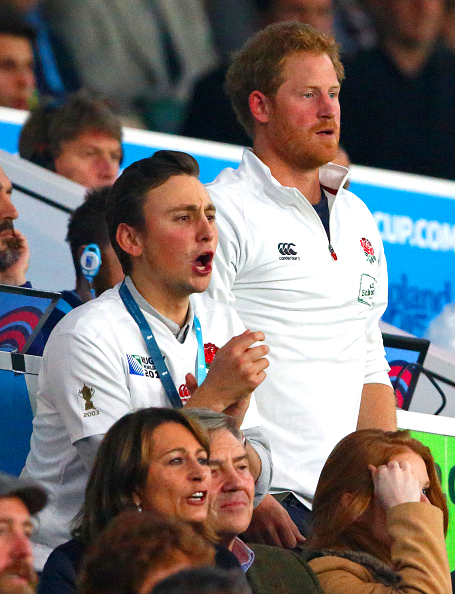 Harry’s bestie was not the only one to make a speech at the evening reception, which was hosted by Prince Charles at Frogmore House. The bride also took the mic and thanked her mother, Doria Ragland, during an emotional speech.

“She said, ‘You have always been there for me through everything,’” an insider paraphrased to Us. Meghan also thanked Harry’s family — including Charles and Duchess Camilla — for welcoming her and Ragland into the family.

Elsewhere at the evening reception, Meghan was seen dancing with her girlfriends as Idris Elba took on a DJ role a source explained. George Clooney, who attended the ceremony and reception with his wife, Amal, was also spotted serving drinks, including his Casamigos tequila, behind the bar.

“Meghan has handled things with grace and dignity. [He said] that he can’t wait for them to be a team,” a second source told Us about the Queen Elizabeth II’s luncheon, which was held at St George’s Hall. The insider added that guests cheered every time Harry called Meghan his “wife.”