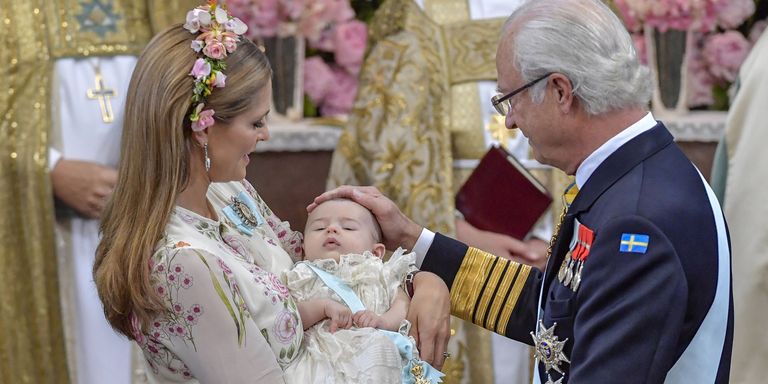 Last week, the Swedish royal family gathered to celebrate the christening of their newest member, Princess Adrienne, in Stockholm. While the baby and her doting parents, Princess Madeleine and Chris O’Neil, were the center of attention, one of the littlest members of the royal family surprisingly stole the show.

Eldest sibling Princess Leonore, 4, was caught on camera lying in the middle of the aisle of the Royal Chapel of Drottningholm Palace. Videos from the event show the toddler rolling on the floor and and kicking her shoeless feet during the ceremony. The ceremony must have been too mundane for her liking, and we can’t blame her.

Her mother looked unimpressed in the clip, but Leonore didn’t seem to care one bit. She simply grabbed her toes and smiled on. What a queen.

A post shared by Princess Madeleine of Sweden (@princessmadeleineofsweden) on Jun 8, 2018 at 7:56am PDT

She was also caught running circles around her mom and little sister at the altar during the ceremony.

A post shared by Princess Madeleine of Sweden (@princessmadeleineofsweden) on Jun 8, 2018 at 7:57am PDT

Princess Madeleine was caught giving disapproving looks and comments to her daughter. Don’t worry Leonore, we’ve all been there.

Princess Leonore of Sweden, Duchess of Gotland, is the eldest of three children, including baby Adrienne and Prince Nicolas, 2. Leonore is eighth in line for the Swedish throne.

Adrienne was christened in a family gown, worn by older cousins and siblings (including Leonore) before her. Princess Madeleine dressed in a lace floral dress and flower crown. Leonore matched in a white eyelet dress—but where were her shoes?

Between Leonore’s stunt, Princess Charlotte’s somersaults, and Prince George’s antics with his cousin Savannah Phillips, royal kids are killing it this week.