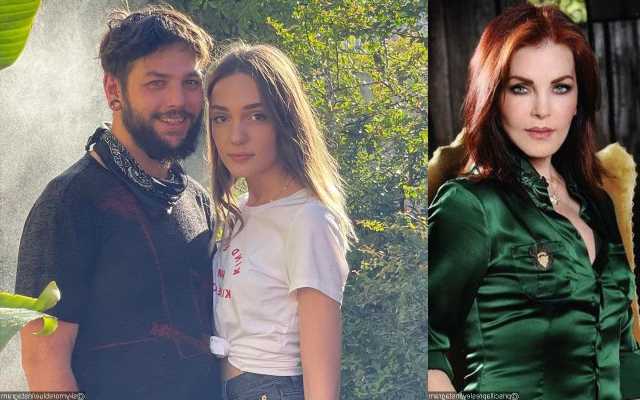 The ex-wife of Elvis Presley exclaims on Instagram, ‘I couldn’t be happier!’ while sharing pictures from the Them Guns frontman’s wedding to her fiancee at the Schloss Hunigen hotel in Switzerland.

Taking to her Instagram page to express her feelings, Priscilla shared snaps from the beautiful wedding. In one picture, the groom leaned in to kiss the bride in front of the guests. The second shot gives a closer look at the happy couple as they shared a smooch.

“Navarone and Elisa are MARRIED!!!” Priscilla announced the news to her followers in the caption. “The wedding was at the beautiful Schloss Hunigen Hotel in Switzerland. I couldn’t be happier!”

In a statement to PEOPLE, the co-founder and former chairwoman of Elvis Presley Enterprises (EPE) said that she had been looking forward to the special day. “They’ve been together for four years and we’ve all have been waiting patiently for this day,” she gushed.

Navarone and Elisa tied the knot at the Schloss Hunigen hotel in Switzerland on Tuesday, February 15. in an outdoor ceremony attended by family and friends including his mother. After they exchanged vows, well-wishers tossed multi-colored flower petals into the air as the pair walked back up the aisle.

The groom donned a navy suit with a bow tie, while the bride wore an Anastasia Bull gown. Jerry Schilling, a talent manager and longtime friend of Elvis Presley, also witnessed the special moment via Zoom.

“I never thought I would find a counterpart that is so understanding and supportive,” Navarone said of his new wife, whom he proposed to on Christmas in 2020. “She makes everything we do effortless, and I can’t imagine life without her.”

Elisa, meanwhile, gushed, “Navarone is truly the most genuine, sweet and sensitive man I have ever known and I’m so lucky that after four years of long-distance, we can start our life together as husband and wife.”

Navarone is Priscila’s son with Brazilian screenwriter-turned-computer-programmer Marco Antonio Garcia (a.k.a. Marco Garibaldi), with whom she lived for 22 years. She was famously married to Elvis Presley from 1967 until their divorce in 1973. They have one daughter together, Lisa Marie Presley.