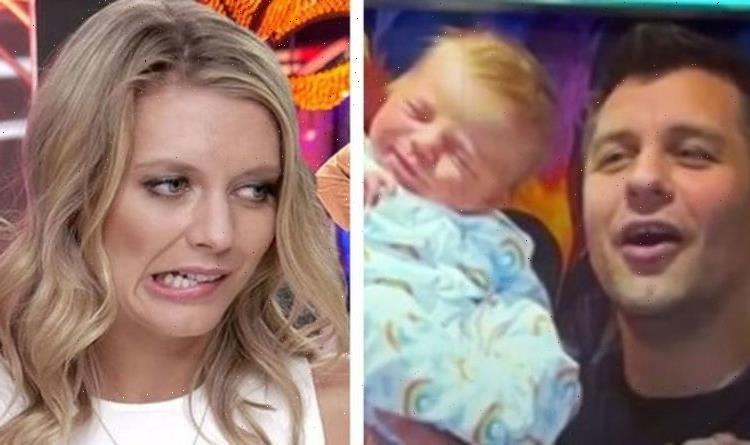 Countdown maths whiz Rachel Riley has two girls with husband Pasha Kovalev, both of whom he loves to help look after. However, the new mother hadn’t bargained on his penchant for increasingly bizarre horror themed movies.

Taking to Twitter to share her concerns with her 693,500 followers, the 35-year-old explained: “Every night I come down from putting the toddler down, Pasha is cuddling the sleepy newborn and watching something relaxing at the end of the day, always of a similar theme.

“Tonight some kind of mutated zombie bear just got shot,” she went on incredulously.

However, other Twitter users hit back with their own interpretations.

“My wife watches hallmark Christmas movies which all have the same plot line based on different imaginary small towns, with the same endings,” @pauloafernandes replied.

@capedjoosader concurred, urging Rachel: “Give him a break he has 20 years ahead of him forced to watch frozen etc then what ever girls watch.”

Meanwhile @birneybau tried to guess the name of the movie Rachel’s horror enthusiast husband had been viewing.

“Annihilation? Did it scream with a human voice?”

The fan continued: “Good film… but yeah, not for babies!”

Then @7Ellis96 chimed in with: “90% of the time my other half walks in on me watching TV late at night it’s Cats does Countdown… so we’re not all weird.

“Having said that, what was the film? I’ve got a few hours to kill…”

@DuncanWatson8 offered a dubious recommendation of his own, writing: “Weird films? You should see WOLFCOP, a low-budget Canadian shlock-horror comedy in which a hirsute alcoholic cop named (wait for it) Lou Garou is turned into a werewolf.

“Perhaps the highest praise which can be paid to this film is that it triumphantly lives DOWN to its title.

Meanwhile @Grasberry73 jokingly chimed in: “Be careful watching those movies right before bedtime. Could lead to some wacky dreams.”

For @colman_ h, however, the terrors would be of a different kind – “he has a lifetime of girl movies ahead of him!”

Yet for now, baby Noa – soon to be three months old – is getting a headstart in understanding the “boy films”, as her father watches an endless succession of films with her in tow.

Incidentally, her birth was as dramatic as the special effects in the movies, as she was born on Bonfire Night to the sound of fireworks.

Pasha, who Rachel met when the pair were competing on Strictly Come Dancing, also co-parents their two-year-old girl Maven.

“I didn’t get anywhere near a glitterball,” Rachel has told Lorraine Kelly of her time on Strictly, “but I got a husband and two little baby daughters!”