Hey guys, I have a riddle. What’s rainbow, sequined, and cute all over? No, it’s definitely not a newspaper — it’s the new rainbow sequin Minnie ears, which are coming to Disney Parks so, so soon! Who’s hyped? I AM!

Summer 2018 is bringing a buttload of really exciting things to our lives. Other than beach weather, margaritas, and hopefully a new Beyoncé album (ugh, dreams), summer is also bringing rainbow sequin Minnie ears to the happiest place on earth, according to the Disney Style website. Hopefully everyone will be able to buy them in time for Pride Month — but if not, it’s OK, because Pride should be celebrated all year long… you feel me? Anyway, for people on both sides of the country, these sparkly and colorful accessories be available at both Disneyland and Walt Disney World Resorts. TBH, that’s the best news I’ve heard all day.

The Disney Style website doesn’t divulge much more information about this glorious new merch, other than the who-what-where. But, they do say that this new rainbow sequined style of Minnie ears "is the most colorful yet." So if that little detail doesn’t get you psyched about all of this, I seriously don’t know what will. The more colorful it is, the better, in my opinion.

say HELLO to your new fave minnie ears ❤️???? these beauties are coming to disney parks this summer! tag someone who definitely needs these rainbow ears

This isn’t actually the first set of rainbow mouse ears that Disney has introduced to their line of merchandise. Just last month, the happiest place on earth started selling rainbow Mickey ears for only $18 at shops throughout Walt Disney World in Orlando, Florida and at Disneyland in Anaheim, California. And even though they haven’t officially been recognized as "Pride-themed," they’re officially known as the "Mickey Mouse Rainbow Love" hat… so it’s pretty clear that they’re meant to celebrate the LGBTQ+ community. Now, they’ll have a Mickey and a Minnie version of their Pride ears, and picking your favorite is about to be a real challenge. 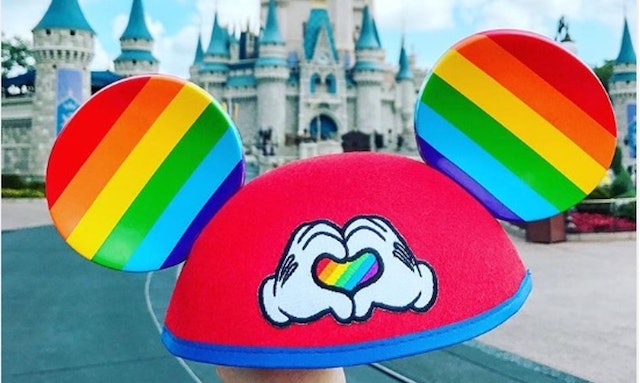 It looks like Disney has been rolling out all different kinds of Minnie ears lately. Last summer, they debuted their Rose Gold Minnie Mouse ears, and they ended up being the highlight of park-goer’s Instagram feeds. The rose gold Minnie ears were covered in rose gold sequins, and topped with a chic AF metallic bow. They were available for purchase at both Walt Disney World in Orlando, Florida, and at Disneyland in Anaheim, California. If you weren’t able to snag a pair at the time, make sure to seek out some look-alikes on Etsy; they’re almost totally identical to the OG pair.

It's been a while since I've taken a picture of ears like this, BUT HAVE YOU SEEN THESE?! Disney Parks are finally giving the people what they want– Rose gold ears!! My inner basic white girl has zero chill. You can snag these just about anywhere on Disney property! What do you all think of the changes and additions Disney is incorporating to their new merchandise? • • • • • • • • • • • • • • • • • • • • • • • #disneyblogger #disneyoutfit #disneyblog #disneyig #disneygram #disneyside #happy #colorful #bright #fun #whimsical #dreamy #inspiration #tumblr #aesthetic #rosegold #minniestyle #flashesofdelight #thatsdarling #livecolorfully #shotoniphone #fashionblogger #styleblogger #lifestyleblogger #blogger #lifestyle #magickingdom #orlando #florida #disneystore

Regardless of which mouse ears you end up buying, it’s vital to Instagram a pic of yourself wearing them. And you obviously have to pick the perfect Instagram caption for it, if you know what I mean. Your Minnie or Mickey Mouse ear ‘grams from your trip to Disneyland or Disney World will be perfect. There are some really cute ideas for captions, and as they say, "If you didn’t Instagram yourself at Disney in Mouse ears, were you ever really at Disney?" I’m pretty sure that’s what everyone says, you guys.

Disney Parks are coming in hot for Pride Month with some awesome new rainbow Minnie and Mickey ears. Honestly, they’re both so cute, and I’d probably buy each one. If you’re set on snagging a pair of Minnie ears, keep your eyes open in the parks — because it looks like they started becoming available earlier this week. For all of you that live nowhere near a Disney Park, I really hope they’ll be available online. But all of you should just get your butts to Disney, anyway. It is the happiest place on earth, after all.