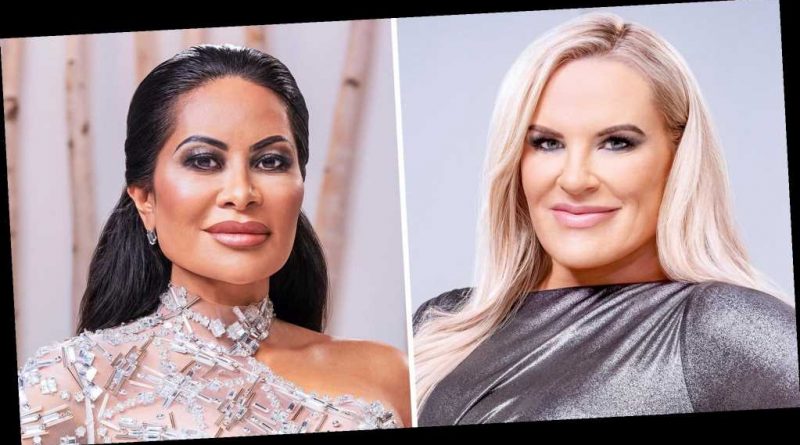 Talk about coworker drama! While the Real Housewives of Salt Lake City cast has stayed fairly quiet about costar Jen Shah’s recent arrest, Heather Gay appears to be the first Salt Lake City housewife to share her take on the matter.

“I AM SHOOKETH,” the reality TV star, 46, wrote in a direct message to writer and Bravo fan Evan Ross Katz, who shared a screenshot of the DM on Thursday, April 1, captioning it with a skull emoji.

“I cannot WAIT for everyone to break their silence,” another Twitter user responded.

Shah, 47, was arrested on Tuesday, March 30, for her alleged role in defrauding hundreds of people in a nationwide telemarketing scheme.

At the time of her arrest, Manhattan U.S. Attorney Audrey Strauss detailed the accusations against Shah and one of her assistants, Stuart Smith, in a press release, claiming that the partners “allegedly generated and sold ‘lead lists’ of innocent individuals for other members of their scheme to repeatedly scam.”

The pair each face a maximum sentence of 30 years in prison for wire fraud charges and an additional 20 years for money laundering charges.

“In actual reality and as alleged, the so-called business opportunities pushed on the victims by Shah, Smith and their co-conspirators were just fraudulent schemes, motivated by greed, to steal victims’ money,” Strauss’ statement continued.

Gay and Shah’s friendship was a huge plot point during season 1 of RHOSLC, which premiered in November 2020. Though they started off incredibly close, the pair’s relationship went through many ups and downs over the course of the season.

During the January 27 episode of the show, the women were asked to name those in their group they didn’t trust. At the time, Shah was the only person who said she didn’t trust the Beauty Lab and Laser owner. Meanwhile, every cast member raised their hand when asked if they didn’t trust Shah.

Though they haven’t shared their thoughts publicly, the women’s reactions to Shah’s arrest will certainly be revealed when the show returns. On Wednesday, March 31, a source told Us Weekly that cameras were rolling at the time the Utah native was booked.

“Jen was filming with a few of the other women present when she was arrested,” the insider said, adding that cast members including Gay, Lisa Barlow and Meredith Marks were “completely shocked” when Shah was taken away. “The women were all about the take a trip to Colorado in the coming days. The women aren’t sure if they are still going yet.”

Scroll to see how Bravo stars are reacting to the allegations: